No frontier sheriff ever strode more proudly down Main Street than Tom Apostol did across the campus of the University of Utah in 1941, wearing his own trusty side arm—a 10-inch Keuffel & Esser log-log Decitrig slide rule. "We all felt very macho walking around campus wearing these like guns in holsters," remembers Apostol, now professor emeritus of mathematics at Caltech. "Plus, we knew how to use the things, and this made a big impression on the girls."

Fast, powerful, and accurate, the slide rule became the weapon of choice for calculation beginning in the 1630s, when Episcopal minister William Oughtred invented the first one. "The slide rule had a tremendous democratizing effect," says Anthony Tromba, chairman of the mathematics department at the University of California at Santa Cruz. "The old princes of Europe and the church could hire their own arithmeticians. But calculation became critically important as the merchant class arose in Europe, and the slide rule helped dramatically in the advance of engineering and business." 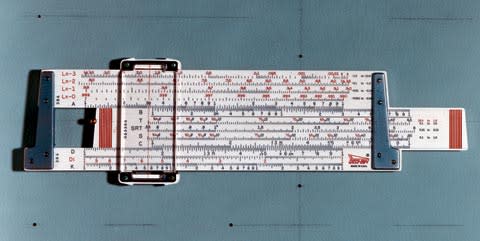 Carpenters, merchants, navigators, artillerymen, and tax assessors came to rely on specialized rules. How much timber could be extracted from a maple log 30 inches in diameter and 41 feet long? How much wine could be drawn from a barrel 38 inches wide at the middle, 24 inches wide at the ends, and 31 inches high? How much gunpowder should be stuffed into a cannon to fire a 12-pound ball 1,200 feet? For every calculation, there was a slide rule that could do the job. Slide rules helped create the steam engine—James Watt and Matthew Boulton would have been lost without theirs. And a slide rule was present at the creation of the nuclear age—Enrico Fermi used his to calculate exactly how far a cadmium control rod should be pulled from a graphite and uranium pile as he demonstrated the first controlled nuclear chain reaction at the University of Chicago in 1942. Moments after making the final calculation, Fermi put away his slide rule, smiled broadly, and announced, "The reaction is self-sustaining." Fermi didn't live long enough to see the reaction of scientists and engineers to the epochal Hewlett-Packard HP-35 electronic pocket calculator in 1972, the device that foretold the doom of the venerable slide rule. At $395, the HP-35 was out of reach for students like Dick Lyon at Caltech, but he received one as a present in 1973, a year before his graduation. His slide rule "got consigned to the junk heap quickly," Lyon says, "because it was not a comparable tool." But as Lyon progressed in his career—inventing the optical mouse in 1980, helping create a handwriting-recognition system for the Apple Newton in the mid-1990s, and becoming chief scientist at the digital-imaging company Foveon in 1997—he began to miss the look and feel of his old 10-inch Keuffel & Esser. He remembered fondly the tiny metal screws holding it together, the finely cut markings, the silky feel of the slide. He was not alone. In 1991 a group of self-described slide-rule nerds founded the Oughtred Society. Lyon joined, and he got to know retired engineer Bob Otnes, editor of the Journal of the Oughtred Society. Like hundreds of others who now buy and sell slide rules on eBay, the two are passionate collectors. The instruments on these pages come from their collections. 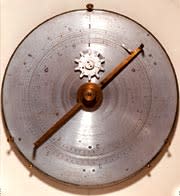 The Achilles' heel of the slide rule is that for most calculations it cannot indicate where the decimal point should go. A circular rule made in Germany around 1870 remedied this problem. The small cogged wheel counted decimal places, clicking each time the pointer made a revolution. Coincidentally, the 17th-century Scotsman who popularized the decimal point, John Napier, also invented logarithms, the engine of all slide rules. Logarithms make it possible to multiply or divide large numbers in streamlined form.

A. Most modern slide rules are equipped with a cursor—typically a transparent slide with a line down the middle. But using a movable marker to help line up scales was still a novel idea in 1891, when Englishman William Cox designed the Cox Duplex, with its chisel-tipped cursor, for Keuffel & Esser. A prolific designer, Cox also wrote instruction manuals for Keuffel & Esser and edited its magazine, The Compass. Slide rule collector Bob Otnes bought this particular Duplex for $17 in 1980. It is now worth at least $1,500.B. Before slide rules were used in engineering, their main function was to compute excise taxes. This 1720 gauging rule could compute the volume of wine or ale in a cask. It is made of boxwood, a very stable, hard, fine-grained wood. C. The basic configuration of logarithmic scales found on modern slide rules first appeared on instruments designed in the 1850s by Amédée Mannheim, a French artillery colonel. This typical 19th-century engineering rule features the Mannheim scales, as well as a cambered edge that served as a 10-inch ruler. D. The French were slow to adopt the slide rule, perhaps because it was a British invention. This boxwood engineering rule, made by Tavernier & Gravet of Paris around 1890, replicates a design made a century earlier by inventor James Watt, of steam engine fame.E. Sized to tuck into a vest pocket, a British-made Halden Calculex from 1908 has a hairline cursor on its rotating glass face and a metal dial to turn the inner scale. A print advertisement for the Calculex, which has additional scales on its reverse side, billed it as "A True Friend and Trusty Guide." It came with an aluminum case and a tiny instruction booklet that was leather-bound and gilt-edged. F. The Fuller Calculator, invented in 1878 by George Fuller of Ireland, was one of the first cylindrical slide rules. If you were to unwind the helical scales, they would stretch about 42 feet. As a result, the Fuller was a benchmark for accuracy, giving results to five figures (although you still had to approximate where the decimal point went). The Fuller came in a hinged wooden box with metal latches. In the 1920s, aviation engineer (and later novelist) Nevil Shute Norway used a Fuller to calculate metal stresses in the frame of the experimental R100 airship, British industry's answer to the German zeppelin. G. Scholars studying the ancient Mayan empire used this circular rule, made in 1935, to help decipher one of the most complicated calendars in the history of civilization. The green band contains the names of the 19 Mayan months; the orange band displays the recurring cycle of 20 named days.H. It was easy to miss a decisive moment while fiddling with the logarithmic scales on this 1930s Austrian photo-exposure calculator. First you aligned the film-speed ring (marked here in Scheiner units) with the ring above it, which compensated for the lack of a filter. Then you'd look through the eyepiece, where light would shine to varying degrees through stamped letters. Then you'd read the column under that letter and select a shutter speed (in black) and an aperture (in red)—and tell Aunt Tillie to hold still a few moments longer. I. Slide rules literally went out with a bang. The Manhattan Project physicists who designed the first atom bomb used them for preliminary calculations. Later, disk-type rules such as the 1960s Nuclear Bomb Effects Computer (opposite) were designed to calculate crater sizes and post-explosion radiation levels. "They were complete BS, made to give people the feeling that their government knew what it was talking about," says collector Dick Lyon. "But they're nice cold war artifacts." 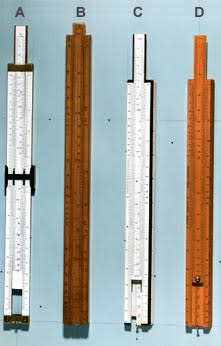 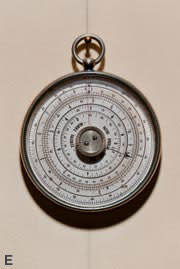 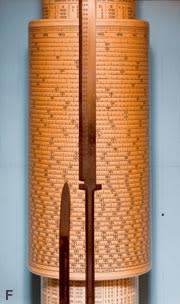 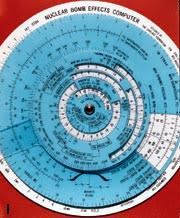 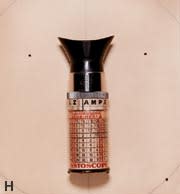 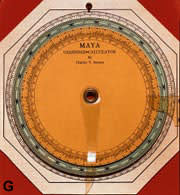 The Oughtred Society's Web site features photos as well as listings of upcoming events: www.oughtred.org.More about the history of slide rules, along with some photos, from the Museum of Hewlett-Packard Calculators: www.hpmuseum.org/sliderul.htm.

Many slide rule sites have photos and instructions for using the rules. Two good sites: www.sliderules.clara.net and www.sphere.bc.ca/test/sruniverse.html.

Dick Lyon is chief scientist at Foveon, a company whose X3 chip may usher in the next generation of digital cameras. Read more in "The Next Photography Revolution" by Eric Levin, Discover, December 2002. This article is available at www.discover.com.