The Falcon Has Landed 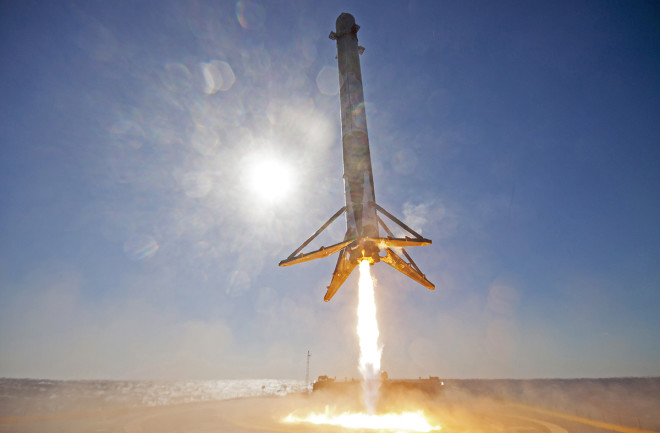 A Falcon 9 booster rocket successfully touches down after a launch in April. | SpaceX

Since the dawn of the Space Age, science fiction enthusiasts have fantasized about reusable rockets. Over the past year, Elon Musk and his company, SpaceX, made those visions a reality. Now, the tech mogul has his sights set on a bigger, redder prize.

SpaceX has tried four times in the past two years to land one of its Falcon 9 rockets at sea; each exploded. But in April, a Falcon 9 successfully touched down on a drone ship in the Atlantic — a first — after ferrying cargo to the International Space Station (ISS). Months earlier, in December 2015, SpaceX pulled off its first land touchdown, at Cape Canaveral. The company was planning to relaunch one of those successfully landed Falcon 9s for the first time in late 2016 or early 2017.

Musk hopes reusable rockets will make colonizing Mars an affordable reality. In April, the space entrepreneur said he’ll send an unmanned spacecraft to Mars by 2018. And at the International Astronautical Congress (IAC) in September, he said he’d send more spacecraft every 26 months for the foreseeable future. “We want to establish a steady cadence so that there’s always a flight leaving, like a train leaving the station,” he told the IAC.

Before departing for the Red Planet, though, SpaceX must show that the monster next-gen rocket it needs to get there, the Falcon Heavy — essentially three Falcon 9s strapped together — can also launch, land and relaunch. At press time, the company, which would not comment on the subject, listed on its website an initial Falcon Heavy test launch at the end of 2016. Media reports suggested it might take longer.

And September brought a reality check. After eight successful 2016 flights, a Falcon 9 exploded during routine fueling at Cape Canaveral. On Twitter, Musk called it “the most difficult and complex failure we have ever had.” The explosion could delay SpaceX’s 2017 plans to ferry NASA astronauts to the ISS, which the space agency now expects won’t happen until 2018 — a deadline that’s already been postponed twice.

As if the vision of colonizing Mars wasn’t bold enough, Musk also revealed the Interplanetary Transport System at the September IAC, featuring a dramatically scaled-up Falcon 9 that dwarfs any rocket ever built. Musk says the rocket’s companion passenger ship could travel the entire solar system and enable a fully self-sustaining civilization (roughly 1 million people) on Mars possibly by 2060. Now, he’ll just have to solve the numerous other engineering and social challenges of such an endeavor — and find a way to pay for it.

“It would be an incredible adventure,” Musk told the audience at the IAC meeting. “And life needs to be more than just solving problems every day. You need to wake up and be excited about the future.”