The Facebook Movie Comes Out Today. Is It Fact or Fiction?

arrives in theaters around America today. Written by Aaron Sorkin (creator of the TV shows The West Wing and Sports Night), the film purports to tell the tale of Mark Zuckerberg's creation of Facebook at Harvard, and drips with backstabbing high drama. The early reviews are in, and the forming consensus is: It's a fabulous film, but don't go to the cinema expecting the truth. The Facebook company itself has called the film a fiction. But that's partly because Zuckerberg has shown no inclination to discuss his history—at least not with the creators of this film. 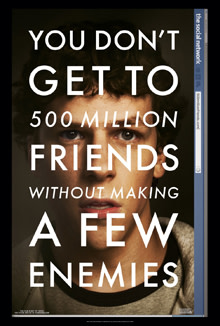 What makes The Social Network more intriguing than a standard biopic is that it was made without the co-operation of its principal subject -- whose own mission in life seems to be to let us all make unauthorised biographies of each other. Personality and motivation inferred from a smattering of potentially misleading facts: isn't that precisely the kind of thing that worries people about Facebook? [New Scientist]

It's also hardly a surprise if events have been exaggerated, changed, or conveniently omitted in The Social Network, because the film is based upon the book The Accidental Billionaires

by Ben Mezrich, who isn't exactly a stickler for historical accuracy. Mezrich's breakout Bringing Down the House

, the story of MIT students taking on Las Vegas casinos that became the film 21

, was purported to be non-fiction, just like The Accidental Billionaires. But multiple investigations

by the Boston media

showed the facts of the story to be "embellished beyond recognition" in Mezrich's account. The Social Network appears to have the same problems.

The half-truths begin with the movie's opening scene, in which the famously maladroit Zuckerberg goes full Asperger's on his girlfriend, who proceeds to dump him with a series of sharp-tongued, Sorkin-ian retorts. Burning with vengeance, Zuckerberg hacks into Harvard's servers to grab students' images, then codes a site called Facemash that allows users to rank the photos by attractiveness.... While this fantasy works nicely on the big screen, it's pretty much hooey. Counter to its depiction in The Social Network, the real Facemash included photos of both men and women—a fact that cuts against the depiction of Zuckerberg as a horny dude out for revenge. [Slate]

Even the girlfriend is fiction

. If you're curious what details of history have been changed, check out Business Insider's list

of the most glaring lies in the film. Back in the real world, however, people at Facebook have to wonder how the portrayal of Zuckerberg as unsavory antihero affects the company.

"It's hard to spin this as a good thing for Facebook," said Augie Ray, senior analyst at Forrester Research. But at the same time, he added, "it doesn't mean immediate damage either."

Will it prompt users to cancel their accounts? Discourage sponsors from advertising? Most likely not. But it could affect Facebook's ongoing battle to fix its credibility with how it handles privacy and how it shares its users' personal information, Ray said. That Zuckerberg in the film comes off as insensitive, callous and cavalier probably doesn't help. [San Francisco Chronicle]

For the rest of us, though, The Social Network is just entertainment. To that end it's probably good that Sorkin said he put storytelling over strict adherence to the facts.

The Social Network is terrific entertainment — an unlikely thriller that makes business ethics, class distinctions and intellectual-property arguments sexy, that zips through two hours quicker than you can say "relationship status," and that'll likely fascinate pretty much anyone not named Zuckerberg. [NPR]