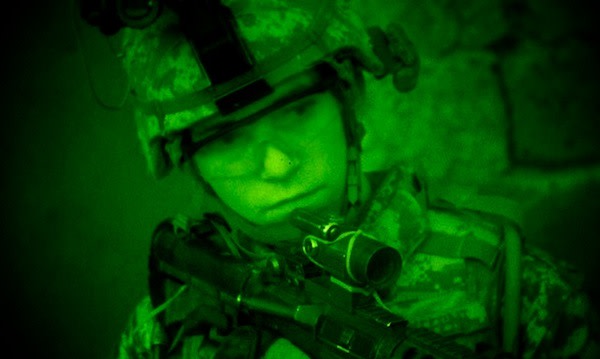 the on-again-off-again relationship the military has with human enhancement:

In 2002, Dr Joseph Bielitzki, chair of DARPA’s Defense Sciences Office, announced a grand program to improve soldiers, with the slogan “Be all that you can be, and a lot more.” His targets: sleep, fatigue, pain, and blood loss. Other projects studied psychological stress, memory, and learning . . . The words on everybody’s lips were “human enhancement,” the use of science and technology to upgrade the human body and mind . . . According to military futurists, the then-new War on Terror required a new type of soldier, independent, fast and more lethal than ever before. But in Iraq and Afghanistan, the military discovered that elite special forces alone could not restore stability to war-torn countries. General Petraeus’s counter-insurgency strategy relies on building relationships with local partners and requires soldiers with diplomatic skills, not combat enhancements. Approximately $4 billion in annual research funding was shifted away from blue-sky projects to better reconnaissance drones and defenses against roadside bombs, the insurgent’s weapon of choice. And in combat, hard lessons were relearned: War is random, and a super-soldier is just as dead as anyone else if his Humvee rolls over an IED.

Emphasis mine. Burnam-Fink's point is one well taken: amping up your average G.I. Joe into some sort of techno-berserker übersoldat is not the solution for modern warfare. Super soldiers are still quite susceptible to mundane threats. But re-read that little bit I've bolded about Patraeus's counter-insurgency relying on relationships and diplomacy. The conclusion was that combat enhancements were not as useful as hoped, not that human enhancement in general was deemed ineffective. Sounds like the US military should focus on enhancing the qualities Patraeus said worked. Create great soldiers who are better, nay, super diplomats. Moral and mental enhancement might improve the panoply of diplomatic skills, including language learning, situational awareness, and culturally sensitive negotiations. Not exactly as Hollywood Cool as see-around-corner rifles or personal heads-up displays, but no one ever said real human enhancements would be glamorous. More to the point, these enhancements would save lives. If a soldier can form a relationship with the locals and properly evaluate an urban environment, then that may lead to more peace with fewer shots fired. Now that sounds like human enhancement. Image of A U.S. Army Soldier from Task Force Regulars 1st Battalion, 6th Infantry Regiment, Renegade company by Tech. Sgt. Cohen Young via