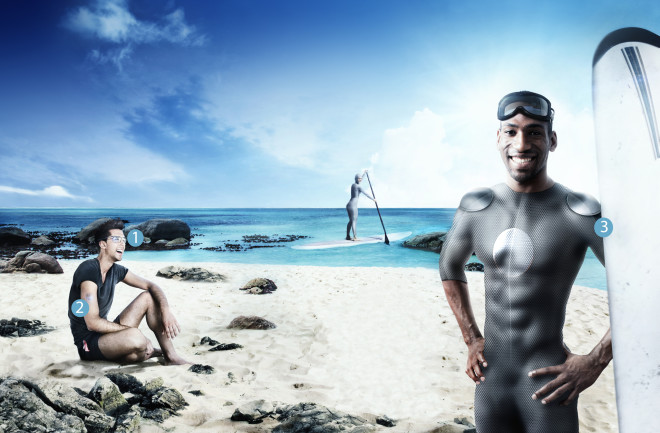 In the tech and gadget field, 2033 has been a year to remember. Who can forget Prince George celebrating his 20^th birthday in July with a mesospheric circuit of Earth in SpaceX’s first consumer-targeted vehicle, the Muskie?

Or in October, when NASA officially opened its second permanent lunar base with a live BrainSync between honorary Moon President Neil deGrasse Tyson and a select group of fans who won the chance to access portions of his long-term memory through a QuantumWeb sweepstakes?

While the Muskie and the BrainSync won’t hit the mass market until well into 2034, that doesn’t mean you have to content yourself with last year’s toys. Discover tested some of the newest, shiniest stuff out there to bring you our top picks for your 2033 holiday wish list.

Choose an extinct animal, and the DADE app will send you the complete starter kit, including DNA and a tutorial on how to find and catch the living animal you’ll be using as a host breeder.

Can’t decide which animal you want to bring back from beyond the brink? No problem! DADE includes a fun quiz that will help you determine the right animal for your lifestyle. (Example: “Homes with children should not de-extinct microraptors, which tend to be a bit bitey.”)

Also available and recommended: the DADE Extended Warranty. In the event your de-extincted animal doesn’t work out and, say, wreaks havoc in your local ecosystem, wiping out long-established flora and fauna, having the extended warranty covers all costs associated with the capture and transport of the animal to the Island of Misfit Toys, formerly known as Isla Nublar, off the coast of Costa Rica.

Smart textiles, first developed in the mid-‘10s, have been used to change fabric color in the past, and to recharge our mobile devices — without them, after all, we’d all be forced to take off our Smartsleeves and plug them in to recharge. This new generation of jeans, however, offers fabric-flexible enhancements, adding literally thousands of new style combinations to one pair of jeans.

Thanks to polymers woven into the composite fibers to create the form-fitting clothing, wearers can control texture as well as color, changing their look from black leather to a bright tartan to traditional denim and more with a single voice command.

No one will forget how the 2024 Summer Olympics in Doha were marred by Sneakergate. Seven world records set at the Games were struck from the history books, and more than a dozen medals were stripped from athletes caught lacing on enhanced footwear.

The athletes’ gains in speed and endurance using piezoelectric transducers hidden in their shoes’ soles, drawing energy from one footfall and transferring it to the next — known as “foot-boosting” — faced such a public backlash that the burgeoning industry went underground. Almost 10 years later, however, enhanced footwear is entering the mainstream and even celebrating its outlaw status.

Makers of Cheat Sneaks, the first commercially available foot-booster, hired a trio of disgraced Sneakergate ex-medalists as their bad-boy spokesmen. But our test drive proved it’s not all about the marketing. Discover staff members who tried out the Cheats took an average of 1.8 minutes off their mile run, and one ambitious editor managed a marathon in less than four hours despite not training for it. We’ll run with that.

Just as the dude ranches of the 20^th century gave city slickers a taste of the cowboy life, ‘Roid Rustlers’ new two-week immersion sends civilians into the world of our Near Earth Object Neutralization heroes.

Although participants don’t actually join a NEON team, they stay in guest housing at NASA’s NEON training center in Pasadena, Calif., and experience the same simulators that cadets use to assess the threat of an incoming asteroid or comet, determine whether it needs to be nudged into a different orbit or destroyed, and carry out their mission.

Given the celebrity status of the NEON crew that saved us all from 2026 JL18 a few years ago, we expect spaces to sell out quickly.

It’s been 20 years since Maastricht University researcher Mark Post gave us a first taste of lab-grown meat: a hamburger that, at the time, cost $325,000 to engineer. (That’s $3.2 million adjusted for 2033.)

Sure, costs came down and we all learned to love beaker-born bacon and racks of lamb grown in stacks of petri dishes. The savings in water use, land degradation and feed grain production also have translated to better quality of life for many of the 8.5 billion humans now living on our planet. Traditional hoof-grown meat is now limited to high-end meateries. But home production of shmeat — sheeted meat product — has been limited. Until now.

Dino-Dish, from the makers of this year’s highly anticipated Dial-A-De-Extinction, allows home cooks to print stem cells of select extinct animals, choose which cut they want and then grow their own Stegosaurus steaks and T-Rex T-bones. The kit includes a pocket 3-D printer, stem cell starter and tabletop lidded meatbox to ensure the shmeat grows in a temperature- and humidity-controlled environment.

Kits are available for five dinosaurs, though the company plans to expand options next year to include woolly mammoth and pterosaur, which is rumored to taste like shicken.

It’s hard to imagine what life was like before 97 percent of us lived in urban environments — or is it?

Developers of Neighbor-B-Gone based their research on early Internet images and the oral histories of seniors born and raised in the 20th century to create a customizable home environment system. NBG includes surround sound speakers; visual, aural and olfactory projectors; and temperature and humidity controls. It will transport you out of your small skyscraper apartment and “back to the land.”

Change your environment to suit your mood: Start with a white-noise base to cancel out neighbors shouting into Smartsleeves or stomping around in virtual gaming rigs. Then, choose your environment from now-extinct 20^th century sights, sounds and smells, including a Malaysian rainforest, an undeveloped Caribbean beach, even a small-scale Midwestern family farm.

In the decade since genetically modified crops for human consumption became the norm, flawlessly smooth, plump red tomatoes and blemish-free bananas fill the aisles of the supermarkets where we send our butler robots to shop.

But those traditional farmers protesting the contamination of their heirloom crops back in the early ‘20s with windblown GMO seed may have had a point. There is something appealing about the occasional lopsided apple or squiggle-shaped summer squash. Now you can enjoy all the enhanced vitamin content, increased pest resistance and decreased water needs of a genetically modified vegetable and still serve salads that have a homey, rustic touch.

The Perfect Imperfection kit comes with a dozen varieties of seeds that have all the advances of genetic modification but the appearance of their heirloom ancestors. The seeds are engineered for maximum yield in the standard balcony garden plot of 3 square feet. Your foodie friends will marvel over the misshapen slices of tomato in your caprese salad — so retro, yet still with 40 times the lycopene, and 20 percent of the water requirements of last century’s crops!

Google Glass and its newer competitor, iGlass, have become firmly established in our daily routines. Can you even imagine being without instant eyeball access to the latest Brainbook status updates from friends thinking about what they ate for lunch? But maybe you also feel like you’re missing out a bit, only you’re not quite sure what the hollow feeling inside means.

That’s why you need the Oogle Glass app. It opens a window within your Google Glass or iGlass window, streaming video of all the things you’re missing out on while you obsessively check sports scores or watch amateur videos of cats riding Roombas. Thanks to Oogle Glass, you’ll be able to say that, technically, you didn’t miss your friend’s wedding or that amazing sunset last night; you just chose to ignore it.

Hipsters may love showing off those unwieldy, retro cell phones they found in grandma’s attic, but most of us have embraced the ultra-thin, ultra-flexible Smartsleeve. Integrated into our business suit or workout shirt, Smartsleeves keep us connected to friends, family, music, movies and our favorite pizza delivery place.

But who wants to wear a ‘Sleeve to the beach? No one — unless they’ve got Smartskin. The translucent electronic polymer patch adheres directly to your hand or forearm. Fourth-generation tissue conduction technology (TCT) lets you listen to tunes or take and make calls, using voice recognition commands to switch between tasks, all without headphones.

Earlier TCT products required the device to be in contact with your head so sound waves could travel through the skull and soft tissue to your eardrum, but Smartskin’s TCT is so sensitive you can still hear your workout mix wearing the patch on your thigh or calf. A built-in holograph lets you game or watch movies even in bright, outdoor settings.

Next summer is expected to be the third in a row with completely ice-free waters above the Arctic Circle, and tourism in the once-remote region is thriving. Be the first of your friends to take to Baffin Bay or Beaufort Sea for a paddling holiday. Polar bears are no longer a threat, of course, but swells and the wake of all those commercial vessels can still swamp your craft and ruin your day — that’s why the Arctic Adventure model comes with an adjustable smart textile survival suit.

The suit, which can be worn with or without hood and visor, maintains a comfortable internal ambient temperature of 70 degrees whether you’re paddling your heart out or taking a swim (intended or not!). The sleek, form-fitting suit with attached gloves allows for full range of motion and includes four solar cell patches, on shoulders, back and chest, so that you can charge your Google Glass, iGlass, Smartsleeve and other mobile devices regardless of the position of the Arctic’s 24-hour summer sun.

Our gift guide wasn’t just a futuristic flight of fancy. Our imagined gadgets are based on the logical evolution of technology that’s on the market now or coming soon, as well as conversations with developers and industry observers.

We’ll admit to adding a touch of skepticism, too. As Cornell professor Geri Gay — who studies interactivity’s social and technological implications — put it: “There is always this dilemma between can we do it and should we do it, and if we shouldn’t do it, can we stop it from happening anyway?”