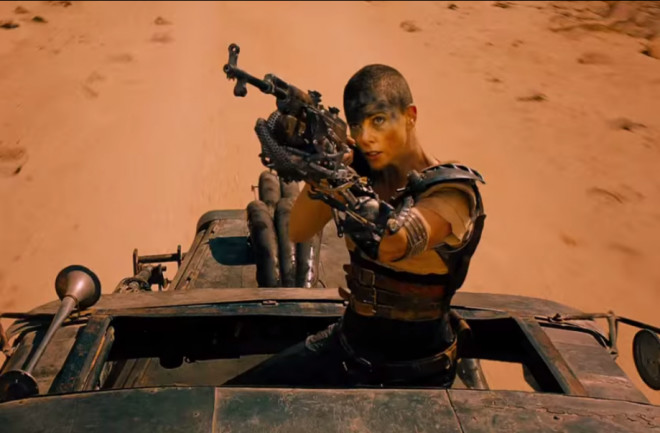 The character Imperator Furiosa from "Mad Max: Fury Road" wears a prosthetic in place of her left arm. Credit: Warner Bros. Many science fiction films showcase cyborg technologies that give ordinary humans superhuman powers. The film "Mad Max: Fury Road" takes a very different route by featuring a heroine with an artificial left arm and no superhuman powers. That doesn't stop the character named Imperator Furiosa, played by actress Charlize Theron, from proving herself a capable warrior in the post-apocalyptic future. She drives a behemoth "war rig" vehicle. She shoots a variety of long guns and handguns. She wrestles and punches opponents with and without the help of her robot arm. Furiosa has already been hailed as one of the strongest female action heroines to grace the silver screen in years. But "Mad Max: Fury Road" is also drawing praise for how it depicts Furiosa as the wearer of an artificial limb without making a big deal out of her disability. The story of "Mad Max: Fury Road" makes a very conscious choice to not focus on Furiosa's missing left arm or its artificial replacement from either a visual or dialogue standpoint; none of the other characters even remark upon the fact that Furiosa has a prosthetic arm. Laura Vaughn, a woman born without a lower left arm, wrote on her personal tumblr about her appreciation of seeing Furiosa in action. (WARNING: Some spoilers follow.)

Watch Furiosa load a shotgun. Watch Furiosa punch Max in the face, with her nubbins. Watch Furiosa drive a semi tractor trailer. Watch Furiosa fire a long shot, using Max’s shoulder to stabilize the gun barrel, as an alternative to using two hands! Watch Furiosa do anything you can do, but better, and with half the number of fingers. The effortless manner in which this film has presented a character’s disability is incredible. I literally could not ask for anything more. It’s ubiquitous. No big deal. Her body is never a plot point. It is simply allowed to be.

The film's storytelling choice makes sense, considering how many of the human inhabitants of the "Mad Max" wasteland are physically marked by malnutrition, disease, genetic mutations and possibly radiation poisoning. The main settlement, known as the Citadel, is ruled by Immortan Joe, a warlord whose body is in such poor health that he relies upon a wearable respirator and has visible skin problems. Even the strongest of his sons, a towering behemoth known as Rictus Erectus, relies upon his own portable respirator device to supplement his presumably weak lungs inherited from his father. Healthy humans appear relatively far and few between, and many people seem to have suffered in both body and spirit. "As the world fell, each of us in our own way was broken," says Max, played by actor Tom Hardy, in the film's opening narration.

A look at the prosthetic arm of Imperator Furiosa in "Mad Max: Fury Road." Credit: Warner Bros. The technology behind Furiosa's prosthetic arm isn't ever really explained, but that hasn't stopped people from speculating. One blogger under the name "Prosthetic Armfucker" describes the prosthetic arm as a "robot arm" that can be manipulated "without a physical remote control." That suggests some sort of electrodes helping to translate the electric signals from Furiosa's arm muscles into the prosthetic arm's actions. Another blogger named "Serf" speculates that the artificial limb might operate based on that setup, but ultimately seems willing to overlook the practical workings of such an arm in favor of "movie magic" Serf also points out how Furiosa seems pretty normal when compared with the broken, crazed bands of humanity that struggle for survival. Just as importantly, Furiosa appears perfectly at ease with or without her prosthetic arm attached.

See, Furiosa’s comfort with herself mirrors my experience as an amputee. I feel just as home with or without my prosthetic leg, and seeing that onscreen felt fantastic. Furiosa removes her prosthesis several times during the movie, and each time it is shown to be normal, her confidence never wavers.

The "Mad Max" vision of broken human bodies stands out all the more when compared with the recent slew of science fiction films that envision future technologies enhancing human capabilities to a superhuman extent. Many such films, including Marvel's popular superhero lineup in the "Avengers" films, show ordinary humans enhanced by cyborg technologies so that they can fight against more powerful foes. Tony Stark, aka Iron Man, represents one of the most obvious examples with his wearable robotic suit. Other examples include the villainous Winter Soldier, an assassin with a prosthetic arm that provides superhuman strength. Serf's analysis of "Mad Max" uses the Winter Soldier as a basis of comparison for Furiosa.

Her capability comes from being a badass, by the way. Her artificial arm doesn’t grant her superpowers like the Winter Soldier, it is just a replacement for her limb. A common trope in movies featuring prosthetic limbs is that they empower the amputee beyond a normal person in some way. There’s nothing wrong with that, but I don’t count it as amputee representation, because having a prosthesis doesn’t grant me any special powers. The cyborg badasses of fiction are a method by which able-bodied people map their desire to be even more able onto the bodies of amputees, just another power fantasy.

That choice of depiction sets "Mad Max: Fury Road" apart even from other recent science fiction films that have also featured heroines using cyborg-style technologies. Many such heroines don't necessarily have prosthetic limbs, but they wear technologies that augment their bodies in some way. For example, Rita Vrataski from the 2014 film "Edge of Tomorrow" wears a mechanized military suit into battle against relentless horde of "mimic" aliens. In an example of "power fantasy," Vrataski uses her mechanized suit's superhuman strength to hack at her enemies with a huge sword in close combat. Similarly, Mako Mori from the 2013 film "Pacific Rim" represents one half of a two-person team who can use their minds to directly control a huge "Jaeger" robot in humanity's struggle against "Kaiju" monsters. (Coincidentally, an even bigger sword power fantasy comes into play for "Pacific Rim.") That's not to say that such power fantasies involving cyborg technologies can't be fun, as evidenced by how often they recur in science fiction. But it's clear that storytelling could use more characters such as Furiosa who offer more grounded representation — and inspiration — for today's real-life cyborgs who use prosthetic devices. Perhaps it's no coincidence that the 2012 Paralympics happened to run with a very "Mad Max" theme for the closing ceremonies. https://www.youtube.com/watch?v=hEJnMQG9ev8