The Creepy Robot That Hears You Breathing Through a Wall 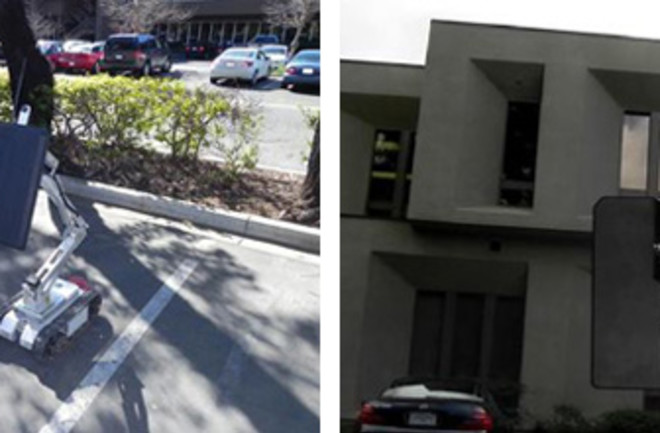 The robotic ears of the U.S. Army just got an upgrade: now robots don't have to be right next to a wall to detect humans breathing on the other side. Created by the California company TiaLinx, the Cougar20-H is a radar-using robot that looks like a small blackboard on wheels. As Wired reports:

The ... Cougar20-H “can ... be remotely programmed at multiple way points to scan the desired premise in a multi-story building and provide its layout,” TiaLinx boasted.

The remote-controlled robot could save lives as troops battle insurgents in Afghanistan and other regions because it allows them to 'see' who's inside a building before they physically enter. And there's the possibility that it could be used to fight human trafficking or to help with rescue missions. The Cougar20-H is the latest model in an ever-growing line of technology from TiaLinx that started with the Eagle5-N. As National Defense reports:

With the ... Eagle5-N ... “very, very minute motions can be detected,” founder and CEO Fred Mohamadi said.... In addition to breath detection, it can monitor a heartbeat and, by extension, the stress level of a person. It also can analyze the movement of a person’s rib cage. The Eagle5-N remotely uplinks the data it collects to a monitoring station.

In terms of technology, the company's major achievement is the ability to stuff powerful radar capabilities into such a small device. The Eagle5-N eventually became the Cougar10-L when the gear was placed on a mobile robot. The latest Cougar is a more powerful bot which, unlike its predecessor, doesn't have to have its 'ear' against the wall in order to hear a breath. So now, thanks to science, unless terrorists and insurgents can hold their breath--and their heartbeats--for more than a few minutes, the army will find them out. Related Content: Discoblog: Killer Military Robots Gaining Independence Discoblog: Disarmingly Cute: 8 Military Robots That Spy, Fly, and Do Yoga Discoblog: Military Blob-bot to Ooze Its Way Past Enemy Lines DISCOVER: The Future of TerrorismImage: TiaLinx