"The Cloned Child is Coming": Doctor Claims He's On the Verge 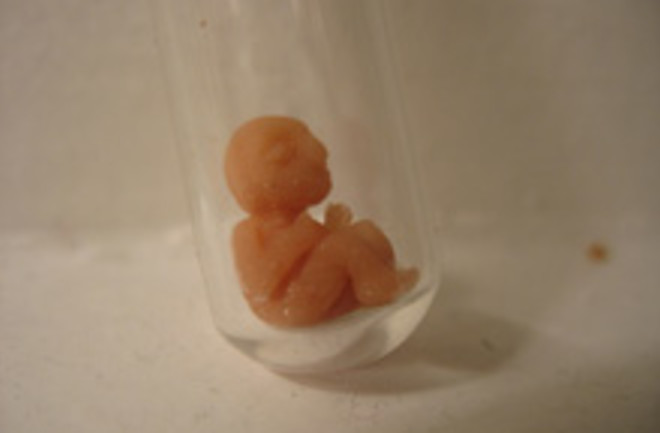 A U.S. fertility doctor has claimed that he can clone human embryos—and plant them inside the wombs of women who want cloned babies. So far, none of his implantations have led to successful pregnancies, but Panayiotis Zavos is certain that the first cloned baby is not far off. Britain's The Independent, a less-than-the-most-reliable source for science news, reports that Zavos can be seen here creating human embryos before injecting them into the the womb. Zavos says he has transferred 11 of a total of 14 cloned embryos to the wombs of female patients, and that this is only the "first chapter" in his research—which he is confident will eventually produce successful results. "I may not be the one that does it, but the cloned child is coming. There is absolutely no way that it will not happen," Zavos told The Independent. He isn't sure whether the research can be expedited to produce a cloned baby within a year or two. But then again, rushing it would emphasize the wrong priority: "We're not really under pressure to deliver a cloned baby to this world. What we are under pressure to do is to deliver a cloned baby that is a healthy one." His patients include three married couples and a single woman coming from the U.K., the U.S, and a Middle Eastern country. Zavos, a naturalized American who has fertility clinics in Kentucky and Cyprus, is said to have carried out the work in a secret lab most likely in the Middle East, where there is no cloning ban. Perhaps those bans exist for a reason? Update: Not surprisingly, the science community has not taken Zavos's claims at face value. Here is The Guardian's (skeptical) take on the situation. Related Content: Discoblog: We’ll See Your Sheep and Raise You 50: Dubai Scientists Clone the First Camel