The Chemistry Secrets in a Degrading Photograph 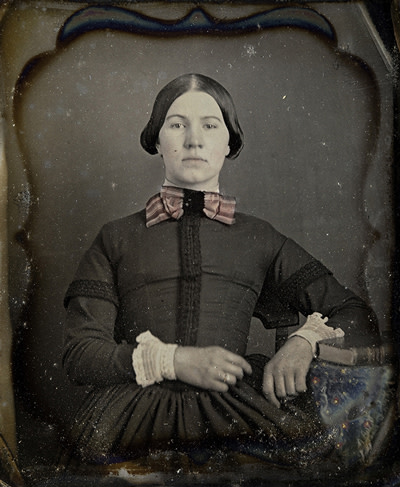 Physicist Volker Rose is looking for a reaction in the crumbling, 150-year-old face of a nameless woman. As she stares back at him from a daguerreotype, one of the earliest kinds of photographs, he’s specifically interested in the chemical reactions that have affected the image’s silver-plated surface. For Rose, peering into historical art is a way to foretell the future of today’s materials.

The chemical corrosion of daguerreotypes like this one (from the Smithsonian Institution) can be used as a model for today’s oil pipelines because the two contain similar chemicals. “Since the daguerreotype is 150 years old, it allows us to fast-forward what we would usually have to simulate,” says Rose, of Argonne National Laboratory in Illinois. It’s like looking into a pipeline’s future.

To look into the woman’s aging features, Rose and his collaborator Edward Vicenzi from the Smithsonian turned to an instrument known as a hard X-ray nanoprobe. The instrument shoots X-rays at samples — in this case, a chip from the old daguerreotype. Chemicals in the sample respond with a kind of radiation fingerprint that helps Rose identify each one individually. This method showed that sulfur present in the environment had settled on the daguerreotype and reacted with the silver surface, causing it to fade.

Understanding this chemical breakdown could help protect these iconic images — among the earliest and most historically important pictures we have — as well as lead to the development of more corrosion-resistant oil pipes down the line.

It’s not the first time old art has aimed to inform future tech: Similar work, studying the chemical reactions at play in Picasso’s The Red Armchair, could influence the design of longer-lasting semiconductors and solar panels.

“Nanotechnology is really where everything comes together — physics, chemistry, biology, art,” says Rose. “We can learn from the past to design smarter materials.”

Volker Rose prepares to study decaying art with the hard X-ray nanoprobe, a powerful particle accelerator that allows him to analyze the work in minute detail. | Argonne National Laboratory

[This article originally appeared in print as "That Old Future."]