The Car of the Future May Have...Legs

Five visionaries imagine cars that walk, fly, and drive themselves. 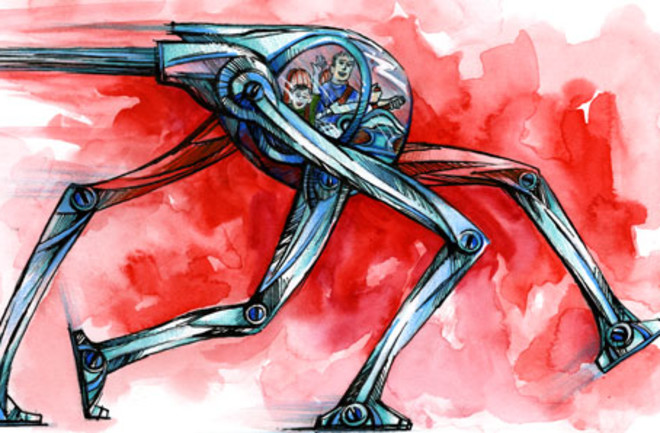 Automobiles have played a huge part in American history, but the rise of the gasoline-powered horseless carriage was not preordained. Cars as we know them evolved in response to a specific set of circumstances. Given the proper impetus, they might easily—radically—evolve again.

By the turn of the 20th century, inventors had built engines run by steam and electricity as well as gas. Each had crippling drawbacks. Steam-powered cars took a long time to fire up; electric cars were slow and couldn’t go far on a battery charge; and gasoline-powered cars were dirty and required tedious hand-cranking. With every product equally bad, market dominance became a matter of affordability. When Henry Ford introduced the Model T in 1908, he made gasoline cars so cheap that they beat out the competition.

A century later, we may be at another turning point, ready for something safer, faster, less intrusive, and more economical. If we were to begin again, what would leading thinkers outside the auto industry, unburdened by tradition, come up with?

James Kuffner dares to ask, “Why wheels?”How does one reinvent the wheel? Replace it with legs. A two-legged car may sound far-out, but James Kuffner has authored dozens of scientific papers that suggest such a scenario could be reality. Kuffner is head of the Planning and Autonomy Lab at the Robotics Institute of Carnegie Mellon University and a frequent collaborator with car companies such as Toyota.

In theory, cars with legs could travel anywhere humans can walk, hike, or climb. Liberated from the wheel, autos would have no need for expensive, tar-covered roads, nor for many bridges or tunnels. Instead, dirt highways would teem with mechanical foot traffic leaping like fleas between concrete landing pads.

Practically speaking, legs beat wheels only in certain domains. Humans have spent thousands of years building roads because wheels are so cost-effective. “Legs will never be as energy efficient as wheels,” Kuffner says, “and I doubt that they’ll be as high-speed.” That’s one reason Kuffner’s current research focus is on smart cars with sensors. But in rough terrain, like a dense rain forest or uncharted wilderness, legs could have the edge.

Kuffner is leading one of six teams of robotics researchers to teach a four-legged robot called LittleDog (built by Boston Dynamics) how to walk over unpredictable terrain. LittleDog’s elder sibling, BigDog, is a gas-powered test mule already hauling 340 pounds up and down snow-covered hills. Make these robots a bit bigger, add space for passengers and onboard controls, and you could have an ambulating automobile.

Brien Seeley, a surgeon, teaches drivers how to flyA practicing eye surgeon, Brien Seeley is also the founder and president of the CAFE (Comparative Aircraft Flight Efficiency) Foundation. This research organization started out holding competitions for superefficient aircraft but is now helping humankind come one step closer to the ultimate sci-fi fantasy: the flying car.

But please don’t call it that. The preferred term among enthusiasts is “air vehicle.”

The dream of air vehicles may seem prosaic after having been proposed every decade since the 1950s, but Seeley does not envision a Jetsons-style autopia. Instead he proposes a lightweight aircraft with high thermodynamic efficiency and extreme drag reduction—not so much a flying car as a powered glider that cruises at about 100 miles an hour and gets at least 100 miles per gallon.

“The classic argument about the flying car is that it ends up being a crummy airplane and a crummy car,” Seeley says. But in his concept, rather than replacing either cars or commercial aircraft, it will be made specifically for trips between 40 and 500 miles.

Skies could then transform into highways for relatively slow-moving air vehicles—and eliminate traffic jams. “You have an unlimited number of freeway lanes and an unlimited number of overpasses,” Seeley says. “The three-dimensional, full-breadth aspect gives you overwhelming capacity,” thanks to a layered web of traffic flying between 3,000 and 5,000 feet. To hop into the fast lane, don’t veer to the left—shoot to the top. Drivers may not even need to train as pilots. Work at NASA’s Langley Research Center shows that a computer-controlled intelligent flight deck can help anyone with a driver’s license pilot an air vehicle safely.

Robert Thompson, a pop culture guru, conjures pint-size autos with moss roofsRobert Thompson, director of the Bleier Center for Television and Popular Culture at Syracuse University, is an oft-quoted expert on what makes Americans tick. From his pop-culture perspective, Thompson can see a world where Hummer-loving Americans abandon their monstrous vehicles to go green, prompting a race to see who can get the smallest, most efficient, greenest car around—a trend that may be starting now.

Thompson believes that American culture revolves around the same themes that characterize our automobiles: independence, freedom, and glitz. For an American, a car has “gotta be flashy, and it’s gotta be conspicuous. Probably at least a little bit garish.” But over-the-top, gas-guzzling road hogs didn’t have to become the primary way to stand out. In a world where the fuel standards set by President Jimmy Carter were maintained, showing off the smallest, most efficient car could have become a national obsession. It’s the same logic that inspired our forebears to add fins and flames to perfectly good automobiles.

Call it green chic: Eco-friendly automobiles could grab attention by displaying a commitment to reducing our carbon footprint—and our astonishing good taste. That is why sales of hybrid cars that look like regular cars are dwarfed by sales of hybrids that scream, “Look at me! I’m eco-tastic!”

Automobiles made of cardboard, covered in moss, and blanketed in birds’ nests could become the next “classic” and soon be regarded as no less ridiculous than a hand-painted muscle car or rim-spinning, bass-thumping Escalade. “It used to be ‘My house is bigger than your house. My car is cooler than your car,’” Thompson says. “Now it’s ‘I’m greener than you are.’”

Chris Urmson, a roboticist, aims to eliminate the driver

You can find Robot City in a weedy 170 acres of abandoned property on the shore of Pittsburgh’s Monongahela River. The facility is sheltered within a massive, rusting locomotive repair house. Amid the robot cars you will find Chris Urmson, a research scientist at the Robotics Institute of Carnegie Mellon University. In November his team’s self-piloted robot car beat out 11 competitors to win the 2007 DARPA Urban Challenge. Now Urmson’s team is working with a five-year, $5 million grant from General Motors to transfer the robot car’s autonomous driving abilities to everyday automobiles.

The modern car, he says, is not far removed from a horse-drawn buggy: The propulsion is up front and passengers sit facing forward. Take away the driver and the architecture of the car transforms for the better. With no steering wheel, gas pedal, or brake pedal, space opens up, allowing people to face any direction. With advanced artificial intelligence to avoid collisions, automobiles would also no longer need tons of protective steel and collapsible plastic. The car could become lighter and more efficient, and driving less of a hassle. “Life without human drivers would be fantastic!” Urmson says.

Robotic cars would also shift the built landscape toward humans. “When you trade brains for brawn,” Urmson says, cities change. No collisions means no need for guard rails. Smart cars obviate the need for traffic signs. And cars that drive themselves also park themselves, leaving human beings to enjoy their cities the way they were meant to be—with parks instead of parking lots.

Peter Diamandis, a space visionary, wants a car that is so youIf you want to travel to outer space, Peter Diamandis is the guy to talk to. As the CEO and chairman of both the X Prize Foundation and the Zero Gravity Corporation, which provides temporary weightlessness by way of “vomit comet” plane rides, Diamandis eats, drinks, and breathes space. Back here on Earth, he believes that the material technology used in rockets could improve cars by making them more personal and expressive.

“In building rocket ships of the future, we have learned to develop very lightweight, extraordinarily strong composites,” Diamandis says. The lighter the rocket, the more payload it can carry. If we can create an abundance of cheap carbon nanotube-impregnated composite materials—currently quite expensive—automobile frames could become lighter than aluminum, stronger than steel, and easier to mold into compound curves.

In cars, this would dispense with the need for uniform shapes. Designers could change the look of the body and still maintain safety and fuel efficiency. “Something that really bothers me is that today’s cars are so damned identical to each other,” Diamandis says. “With different bodies that you just pop on or pop off,” he says, “you can make your car a beautiful work of art.”