The Big Caveat on AI and Future Work 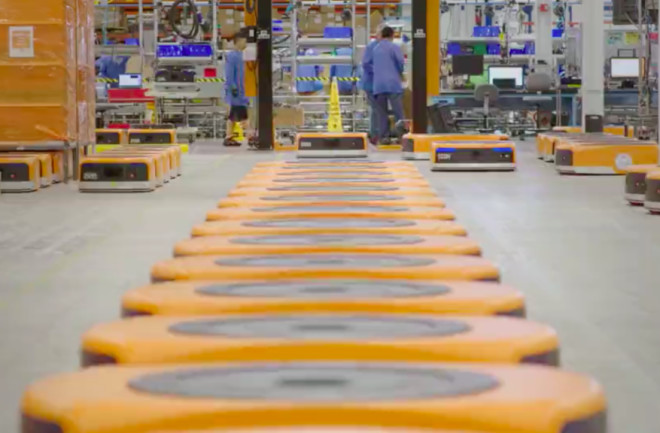 Amazon robots and human workers together in a warehouse. Credit: Amazon Robotics Artificial intelligence will likely both giveth and taketh away jobs for humans. A McKinsey Global Institute report estimates that automation could displace between 400 million and 800 million people worldwide by 2030, even as the report also suggests the benefits of automation could help create enough new jobs for displaced workers. But beyond the numbers, the report offers more useful lessons regardless of whether future work ultimately looks sunny or bleak. One of the clearest lessons from the McKinsey Global Institute report is that countries would be wise to invest heavily in supporting and retraining workers who lose their jobs and need to change careers. This should be a no-brainer move, because such policies would benefit both workers and overall societies even if AI and robots somehow did not displace a single human worker. Yet the McKinsey report notes that "investments and policies to support the workforce have eroded" over the last few decades and pointed out that "corporate spending on training has declined in the United States." That lack of retraining support could lead to big trouble if AI and robots continue to reshape future work. Some of the most eye-popping numbers comes from the report pointing out that an estimated 75 million to 375 million workers who lose their original jobs may need to switch careers and retrain by 2030. Those estimates come from what the report describes as its midpoint automation adoption scenario (15 percent of jobs automated by 2030) and earliest automation adoption scenario (33 percent of jobs automated by 2030). By comparison, the slowest scenario (5 percent of jobs automated by 2030) would supposedly lead to less than 10 million workers needing to change careers. But that's the best case scenario. The report itself describes the retraining challenge for human workers in sobering terms:

The changes in net occupational growth or decline imply that a very large number of people may need to shift occupational categories and learn new skills in the years ahead. The shift could be on a scale not seen since the transition of the labor force out of agriculture in the early 1900s in the United States and Europe, and more recently in China. But unlike those earlier transitions, in which young people left farms and moved to cities for industrial jobs, the challenge, especially in advanced economies, will be to retrain midcareer workers. There are few precedents in which societies have successfully retrained such large numbers of people. Frictions in the labor markets—including cultural norms regarding gender stereotypes in work and geographic mismatches between workers and jobs—could also impede the transition.

Advanced economies such as the United States would likely be most heavily impacted by AI-driven automation. That means they would likely have much higher percentages of their workforces that require job retraining. Up to 33 percent of the U.S. workforce might require retraining for future work by 2030, and possibly close to half of all workers in Japan. It could be a staggering challenge for even the wealthiest of societies. But the past does provide a few examples of the innovative thinking required to help reshape education and job training for future generations. The United States made a big change in its educational system during the workforce shift from agriculture to manufacturing:

During the transition out of agriculture, for example, the United States made a major investment in expanding secondary education, and for the first time required all students to attend. Called the High School Movement, this raised the rate of high school enrollment of 14- to 17-year-olds from 18 percent in 1910 to 73 percent in 1940, making the US workforce among the best-educated and most productive in the world, and enabling the growth of a vibrant manufacturing sector.

The U.S. education system may need yet another major overhaul to prepare students for future work alongside AI and robots. "Educational models have not fundamentally changed in 100 years; we still use systems designed for an industrial society to prepare students for a rapidly-changing knowledge economy," the report says. "It is now critical to reverse these trends, with governments making workforce transitions and job creation a more urgent priority." It does not matter if you believe that AI and robots are overhyped technologies that will have no impact on the workforce, or if you're a sunny AI optimist who believes automation will usher in a future utopia. Better support for job retraining and educational reforms could provide some of the best future-proofing for societies regardless of what happens.