Cleopatra's return, the creation of "sulphagne" (sulfur + champagne), and more 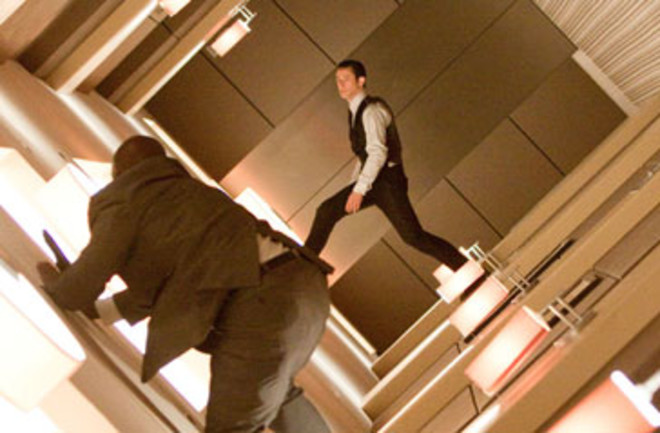 Last summer, in the depths of a Japanese castle, a camera filming Christopher Nolan’s newest sci-fi flick began shaking violently. This was no mechanical failure; it was cinematographer Wally Pfister playing with ways to capture the turbulent world of the mind. The resulting movie, Inception, stars Leonardo DiCaprio as a man who possesses coveted technology that lets him break into people’s dreams to steal their deepest secrets or to plant life-altering ideas.

Despite a budget of $150 million, Nolan insisted on creating these dreamscapes with minimal digital effects. “In the earliest conversations I had with Chris, he said, ‘Remember, this is a dream world. When you’re in a dream, it feels real and you believe it’s real,’” Pfister says. “He didn’t want the film to have an overstylized, surreal look.” For the chaotic castle scene, Pfister (who also shot Nolan’s Memento and The Dark Knight) tested three devices that mechanically shook the camera. In the end he decided just to grab the camera and jostle it himself.

Inception weaves among mental states, from wide-awake to dreaming to dreaming within a dream. “It’s an adventure movie, but in a really cerebral way,” Pfister says. The technical and visual challenges of filming dreams were much different from those of shooting Batman on the prowl, he notes. “And it’s a breath of fresh air to jump onto a project that doesn’t have a guy in pointy ears.”

The Franklin Institute, Philadelphia For decades, archaeologists Zahi Hawass and Franck Goddio have sought the secrets of Cleopatra. Goddio’s explorations in the ocean have uncovered the queen’s royal palace in the Mediterranean Sea, while Hawass’s on land have found clues to her final resting place; along the way, both men have saved a plethora of priceless Egyptian artifacts. About 150 of those artifacts, many never before shown in the United States, are on display here. They include a black granite sphinx believed to bear the face of Cleopatra’s father, Ptolemy XII, and a granite statue head that may depict Caesarion, the son of Cleopatra and Julius Caesar. The exhibit also features undersea footage from Goddio’s crew on dives to the royal palace. Runs through January 2, 2011

The Powers That Be by Scott L. Montgomery (University of Chicago Press)Worldwide demand for energy continues to soar, driven by the emerging industrial economies of China and India. This exhaustive yet accessible look at the global energy supply weighs the future of fossil fuels and carefully considers the alternatives. Colliding social, political, and environmental concerns make comprehensive solutions to our power predicament difficult, but Montgomery, a geologist, is certain of one thing: We are all in this together, and notions of achieving genuine energy independence are pure “horse pucky.”

Four Fish by Paul Greenberg (Penguin Press)Salmon, bass, cod, and tuna—through this troubled quartet of dinner-table mainstays, journalist Greenberg skillfully tells the tale of how the world’s fisheries got to be in such a precarious state. Today nearly all the salmon on grocery shelves is farmed, and the population of the wild variety is four to five times lower than it was before the Industrial Revolution. But Greenberg is no downtrodden pessimist. He highlights ways to save these four fish, such as making cod fishermen more like “herders” managing particular swaths of water where they have an incentive not to drive the population too low. Fish, Greenberg argues, “require absolutely no input from us in order to continue, other than restraint.”

Blind Descent by James M. Tabor (Random House)Self-styled “supercavers” endure grueling physical challenges and the constant threat of death to explore our planet’s dark, wet labyrinths. Vivid descriptions of geological marvels add color to this account of two elite spelunkers—American Bill Stone and his rival, Ukrainian Alexander Klimchouk—competing to find the deepest cave in the world. But it is the astonishing nerve and obsession of the men and their teams that drive the story, which ends in 2004 with a decisive victory for one of them.

The Artificial Ape by Timothy Taylor (Palgrave Macmillan)We humans, despite our weak muscles, fragile bones, and “infantile helplessness,” came to rule the earth. How? Archaeologist and evolutionary scientist Taylor argues that biology alone is not enough to explain it. When our ape ancestors first fashioned tools, technology took over as the driving force in human evolution, propelling us to success. Without our artifacts, Taylor writes, “we are utterly hopeless. Yet with them, we are the planet’s dominant force.”

Open your math textbooks to chapter 3.1415926 and enjoy the subtle but distinctly British humor in this straight-faced send-up of classic classroom film strips. Originally a BBC production, Look Around You flew under the radar during its initial run on BBC America in 2004, but its 10-minute bursts of absurdity returned to the States via Adult Swim in 2009. In this first American DVD release of the show, you will discover the secrets of sulfur, math, iron, and more. Step into a laboratory where scientists toss out their instruments after a single use, where a tissue will block magnetic fields, and where drinking a sulfur and champagne mixture called “sulphagne” lets you shoot deadly lasers from your eyes. But please, don’t try these experiments at home.

OWI T3 If you are tired of buying batteries, perhaps it’s time to play with the power of the sun. OWI’s new T3 transforms into three different toys—a standing robot, a tank, and a vehicle called the Scorpion—all of which are propelled by solar electricity. A photovoltaic panel, about one inch square, feeds energy to a gearbox that turns gears to operate the vehicles. No batteries required.

Be advised, though, that with its many small plastic parts and some DIY wiring, the T3 takes time and patience to assemble. And, of course, its performance suffers if the clouds roll in.

OWI also recently debuted a photovoltaic model solar system, complete with tiny planets orbiting the sun. It even comes with a set of acrylic paints, just in case you are not satisfied with the color nature provided.a.m.