The Animals Hiding in a T. Rex’s Roar 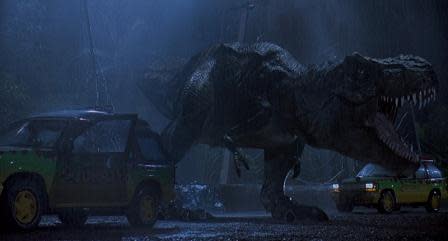 Instead of producing the terror you may suspect, cinema’s most famous roar would probably just confuse a lot of animals. If you made it to the recently re-released 3D edition of Jurassic Park, you’re going to hear a dreadful sound that terrified audiences two decades ago. Tramping through the rain and the mud, the tyrant lizard bursts onto the screen and bellows a soul-shuddering shriek. It’s a noise that is almost as iconic as any other visual effect (which all still hold up, 20 years later) from the film. But no one has actually heard a T. rex roar (or likely ever will), so how do we know if the sound that shook audiences twenty years ago is accurate? Bones and teeth and, if we’re lucky, soft tissues may fossilize, but roars do not. We have only a few clues as to what dinosaurs actually sounded like (if they even roared at all), looking to their relatives for help. The closest living relatives of dinosaurs, birds and crocodilians, certainly make vocalizations, but the bird’s hoots and chirps and the crocodile’s throaty garglings are a far cry from what you hear in Jurassic Park. As far as we can tell, if the T. rex did make its own distinct vocalizations, it probably sounded nothing like the infamous movie roar. Of course, the sound engineers in the film weren’t aiming to exactly reproduce the sounds of the cup rumbling T. rex. They didn’t have a 65 million year old phonograph to go by, so they created the tyrannosaurs screech by combining the yelps and yells of other living animals. Movie sound engineers have been cleverly combining various tones for years (don't forget the famous Tarzan yell!). For example, sound designer Ben Burtt produced the famous Star Wars blaster noise by hitting a tightened steel cable with a wrench. And for Chewbacca’s guttural call he mixed together walrus, camel, and tiger noises. (You can even play sound engineer at home! Get a slinky and a microphone and you can easily recreate the Star Wars blaster sound.) According to the bookThe Making of Jurassic Park: An Adventure 65 million Years in the Making, the T. rex roar from the film was a combination of a baby elephant’s squeal, an alligator’s gurgling, and a tiger’s snarl. Its breath was the sound of air escaping a whale’s blowhole. Drawing from these animals, you can almost hear the composite T. rex roar from the film. Indeed, amateurs have tried recreating the combination and the result is pretty convincing. If any of the animals that made up the roar heard it, they would be confused, perhaps even intrigued. The T. rex roar could be a call for a tiger to investigate, or attack. Scientists now think that their snarls are used to stun potential prey (and even their trainers). Tigers can produce sounds in a range lower than what humans can hear. These infrasonic sounds can rattle and paralyze prey. And if you record these sounds and play them back to tigers, they may even attack the audio speaker. Elephants use infrasound too, but for communication instead of paralysis. Though “language” means something different for humans and elephants, the trumpeting trunks of the largest land animal have intrigued scientists for years. There are entire projects that simply sit in the African jungles and hit the record button hoping to learn more about elephant communication. The Elephant Listening Project is a non-profit almost entirely dedicated to studying the rumbling calls of elephants. For decades a team lead by naturalist Katy Payne has recorded elephants’ “silent thunder” and the context in which it occurs, hoping to decipher the complex context and social cues that are held within. (You can learn more about this fascinating work in this short documentary by 60 Minutes.) The T. rex roar might even turn on an alligator. When they hit sexual maturity, alligators let out loud rumbles to attract females and warn other males. The vibrations from these displays are intense enough to shake the water above the gator like a Tibetan singing bowl. With a roar as loud as the T. rex’s in Jurassic Park, who knows how many female alligators would slink their way over. Put it all together and you get that soul-shuddering sound. It will likely live on forever in YouTube clips and Internet soundboards because it is so unearthly, so bizarrely forceful. The T. rex roar wasn’t scientifically accurate, but it accomplished exactly what the sound engineers wanted. And experts like John R. Hutchinson agree that Jurassic Park’s T. rex is the best depiction of the animal to date, brought magnificently to life with colossal animatronics and CGI that was decades ahead of its time. And Tyrannosaurus rex only gets cooler with scientific accuracy. New research has upgraded the bite force of its steak knife-filled mouth and (probably) given it feathers. Regardless if it could really scream as it does in the film, it still would be the scariest thing with feathers you have ever seen, lest you think feathers are too “cute” for the tyrant lizard. But sadly, Jurassic Park 4 has chosen not to give its dinos feathers, missing a wonderful chance to convey real science to a huge audience. To quote prolific dinosaur author and blogger Brian Switek: “A velociraptor without feathers isn’t a velociraptor.” Though it had fake roars, computer-generated movements, and bones made of hydraulics, Jurassic Park’s Tyrannosaurus rex was a real animal that stalked the earth. Regardless of how many animals the most famous roar in movie history would confuse, it will endure simply because life really did find a way to evolve such a wonderful, terrible lizard. Image: Screenshot of the first entrance of the T. rex via the Jurassic Park 4 movie website.