The 5 Retro Science Kits That Inspired a Generation of Tinkerers

From Erector sets to chemistry kits, science toys have fueled many people's first love of science 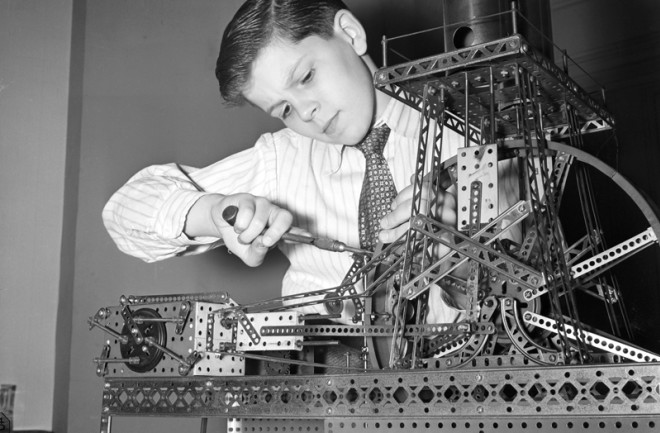 For millions of children growing up in the 20th century, a science kit was one of the big gifts hoped for at Christmas, right up there with a Lionel train set or a Red Ryder BB Gun. Kids with a flair for engineering hoped to unwrap an Erector set and begin constructing the next modern marvel. Those of a more experimental nature wished for a chemistry set and dreamed of discovering new elements or a cure for some disease, generating pungent odors and startling explosions as they went.

Manu Prakash was himself a kid who liked to blow up stuff. As a child in Rampur, India, Prakash didn’t have a chemistry set, so he harvested chemicals after the fireworks show during Diwali, the Hindu light festival.

“My brother and I would go out in the early morning, the day after, and collect all of the unexploded fireworks,” he recalls. “We removed all the chemicals and made a giant pile. We actually lit that thing. We didn’t put it in containment; our goal wasn’t to make a large bang. We were curious what happens when there is no coverage. It pretty much produced a mushroom cloud. It was very beautiful.”

Although he burned his hand and still carries a small scar, the Stanford bioengineer says such open-ended play was important in setting his career path. And as the first-prize winner of the Science, Play and Research Kit (SPARK) competition for reimagining scientific toys for the 21st century, he hopes his brainchild device, called the Punchcard Using Microfluidics, will provide the same inspiration and opportunities for future crops of scientists.

Inspiration struck Prakash when his wife brought home a small hand-cranked music box, which pulled a ribbon with holes in it through two sets of pins. When pins encountered each other through the holes, one pin plucked another and produced a musical tone. He predicted he could program such a system to instead pump fluids, control valves and generate liquid droplets.

Working with a graduate student, Prakash paired a silicone chip (containing tiny channels that guide the droplets) with a small hand-cranked device and some punch-card paper to dictate when valves release the different fluids. Voila! A $50,000 prize winner was born.

Prakash’s invention allows young chemists to mix fluids and observe reactions. Users can mix chemicals in tiny amounts, and any reactions are confined by the chip, which (alas!) safely reduces the scope of powerful odors and explosions.

Prakash hopes to see manufacturing and distribution of his miniature chemistry set, with the SPARK prize money earmarked for a start toward that end. “We want children to have that ‘aha!’ moment . . . a lifelong passion from figuring it out for yourself,” he says.

Prakash’s vision is one shared by many. “I loved science as a kid because we were able to go out and just sort of see what was going to happen,” says Rosie Cook, a curator at the Chemical Heritage Foundation in Philadelphia. “So much of it now is, ‘Mix this and tell me what happened,’ even at the Ph.D. and postdoc level. There’s very little of the ‘I’m going to mix A and B together and see what happens!’ ”

Cook, who oversees the foundation’s planned 2015 exhibition of vintage science kits, says that letting students discover things on their own energizes them and often allows them to internalize it as something wonderful. “How many Nobel laureates got their start just from experimenting?” she asks. “That was the wonder of those old chemistry sets. They really allowed for free play and experimentation.”

That career-shaping moment of awe and wonder came about for many via their first scientific toy. Here are a few of our favorites (and maybe yours, too).

Here, indeed, was joy for those with dreams of alchemy fed by sci-fi movies and television: assorted noxious chemicals, glass containers and the ability to put fire to both.

"Experimenter today, scientist tomorrow" was a recurring motif in ChemCraft's packaging, above. It showed a budding young chemist and the scientist (parents hoped) he would become. (Credit: Chemical Heritage Foundation Collections)

Many manufacturers, including market leaders A.C. Gilbert and Porter, made versions of the classic chemistry set. Most had the same basic ingredients: 12 to 15 powdery elements in labeled containers, various test tubes and beakers, tubing and bottle stoppers, an alcohol burner of some sort, perhaps some pH paper or a small scale, and an instruction manual detailing simple experiments.

Increasing regulation amid safety concerns brought an end to the heyday of the chemistry set. Gilbert went out of business in 1967, while Porter, makers of ChemCraft, labored on with decreasing sales until 1984. Most of today’s successors manufacture safer — if perhaps less exciting — kits with booklets that discourage free-form experimentation while using nontoxic substances.

On a train trip to New York in 1911, a construction project to convert the railroad from steam power to electricity caught the eye of Alfred Carlton Gilbert, a Yale-graduated physician and inventor. Impressed by the steel electrical towers being erected, A.C. Gilbert invented his Erector set shortly thereafter, and first marketed it in 1913.

With pulleys, gears, metal strips and beams (both straight and curved, depending upon the model), screws to fit them all together and even a DC motor in bigger sets, Erector soon became the gift that mechanically inclined boys wanted for Christmas. Many parents were happy to indulge those wishes during a time when engineers generally earned more than doctors.

For most of the 20th century, the Gilbert name towered in the annals of educational toymakers, and the man himself wielded no small influence on the national stage. During World War I, rationing and military demand for metals and other materials almost stopped production of Erector and other toys, and the government came near to canceling Christmas gifting altogether. Gilbert made an impassioned plea to Congress, finally convincing legislators that toys like Erector were an investment in the future of children, at least equal in gain to those made via investment in war. His successful plea led to the popular press dubbing him “the man who saved Christmas.”

To modern eyes and sensibilities, the Gilbert Lab Technician Set for Girls looks like a horribly sexist toy. Drenched in pink and laden with the implication that girls might become a lab assistant but not a real scientist, this microscope set probably wouldn’t bring cheers from feminists were it on today’s market. Historically, though, there was more to it than first meets the eye.

“All of a sudden, there is a set for girls, even though it’s not a full set, and now you don’t have to steal your brother’s anymore!” Cook says.

The included manual, although girly with its pink cover, had the same content as the manual included in Gilbert’s microscope kits marketed to boys. Despite how it looks, this 1958 set represented a major step forward for girls interested in scientific exploration.

If it were on store shelves today, a pink science kit might offend us, but the U-238 Atomic Energy Lab would likely be greeted with shouts of outright alarm (and possibly calls to the Department of Homeland Security).

Gilbert's Atomic Energy Lab was the most sophisticated science kit of its time, but it was available only from 1951 to 1952. Its $50 price tag, equivalent to around $450 today, made it a costly gift. (Credit: Oak Ridge Associated Universities)

With four different uranium samples included — all labeled with fallout shelter-style “radioactive” stickers — the first sight of this 1951 kit still brings pop-eyed expressions. As Cook points out, however, it’s not really fair to think of the makers as irresponsible despoilers of children.

“When you see uranium ore, you say, ‘Oh my God! Radioactive!’ ” she says. “But uranium ore is actually one of the most plentiful elements you’re going to find on Earth. It’s not until the ore is processed and refined, and the pure element extracted, that it becomes extremely dangerous. So it’s one of those things where you look at the set now and say, ‘Oh my gosh, that’s so dangerous!’ because we’re conditioned to think uranium equals danger. But in reality, it probably wasn’t.” The set included a Geiger counter for young entrepreneurs to use to find fresh uranium. (If you didn’t feel like uranium hunting, a handy refill order form came with the set.)

Also included was a spinthariscope, a device for observing nuclear decay. It consisted of a tube with a zinc sulfide-coated screen on one end, radium salt suspended above the screen and a lens on the other end. Through the lens, you could view flashes of light resulting from the collision of alpha particles against the screen during ore decay.

However, first-generation computer wizards most fondly recall the Digi-Comp, a build-it-yourself digital mechanical computer. Beginning in 1963, ESR (Education Science Research) manufactured and sold it for $4.99, a bargain for the educational value it imparted.

Users assembled styrene plates of red and white, wire rods, rubber bands and plastic tubes to create a sturdy contraption. They connected three simple mechanical “flip-flops,” versions of the electronic circuits computers use to store RAM in a way that allowed cylindrical pegs to be either pushed or blocked from moving. When a tyro Steve Jobs or Bill Gates moved a lever back and forth, different configurations of those cylinders caused the Digi-Comp to compute Boolean logic operations. A 3-bit readout displayed the state of the flip-flops. Before manufacturing ceased some 40 years ago, Digi-Comp loyalists could demonstrate binary logic, perform simple mathematical operations and play logic games.

For kids of the 1960s, whose entire knowledge of computers may have been derived from seeing room-size machines in futuristic movies, the Digi-Comp represented amazing possibilities. The principles it employed — such as AND/OR gates allowing multiple inputs but only one output — are still fundamental in digital circuitry applications.

Digi-Comp lovers abound online, with fan sites and message boards devoted to digital archives of photos, original instruction manuals and specs, as well as fond reminiscences of childhood and tales from fans concerning their subsequent careers in computing and related fields.

And for those who wish to recapture a treasured piece of their youth, Minds-On Toys (mindsontoys.com) offers a relatively inexpensive retro version for sale.

We asked science kit curator Rosie Cook for a recommendation of chemistry sets now available. She favors those made by German company Thames & Kosmos, whose kits come packed with assorted chemicals and real glass implements, much like the older sets manufactured by Gilbert or ChemCraft. “They’re not cheap by any means,” she says, “but they are really, really magnificent sets.”

[This article originally appeared in print as "Science Kits: Try This at Home."]