A gathering of geniuses confront a simple question: Why do we know more about our cars than our own bodies?

What's the near future of medicine? The path to an answer can be as forked and confusing as a cerebral capillary. But an odd shortcut leads straight to the Newport, Rhode Island, mansion of a passionate fellow named Richard Saul Wurman, who at the moment is holding forth on how much he loves his car's dashboard. "It has all of these wonderful gauges to tell me how the systems are doing," he says, brimming with characteristic enthusiasm. "I can tell if the trunk or the doors are open. I can see the engine temperature, oil pressure, engine speed, even my tire pressure. I have a navigation system that gives me three ways to go anywhere I want to go. So where's the dashboard for my body? If I demand one in my vehicle, I ought to demand one for my life!" Largely unknown to the general public, Wurman is a smart, charismatic, abrupt, and exceptionally well connected man who tends to get what he wants. He has had several lives—architect, author of 80 books, self-described "information architect," and publisher of the popular Access Press guidebook series. But he is best known as the impresario behind the legendary TED conferences held in Monterey, California. The acronym stands for technology, entertainment, and design, and since 1984 TED confabs have united artists, scientists, and corporate masters of the universe for four days to power-bond, get a good hard look at the near future, and intellectually hybridize. "It began as a result of a brainstorm I had 20 years ago that technology, entertainment, and design were, at their best, one business," Wurman says. "The people in these fields just didn't know it."

"Real-time continuous monitoring is the future of health care," says Astro Teller, CEO of BodyMedia, the company that makes the SenseWear armband (right). The three-ounce device can be worn for four days without recharging and communicates with a PC, which can display captured physiological data.This example shows the user wore the device from 7:20 p.m. to 11:13 p.m. on January 22, that he was active for one hour, 36 minutes, and that he burned 1,112 calories. Galvanic skin response and heat flux are also graphed. Readouts can show how a person responds to specific situations such as jogging on a treadmill, weight lifting, and shopping for groceries.

Given Imaging's M2A video capsule (right) is easy to swallow. "It is very smooth and just slithers down," says CEO Gavriel Meron. The capsule offers a 140-degree field of view, generates 57,000 images in a typical transit, and can detect objects less than .01 millimeter across. At right, the capsule's view of the villi in a normal intestine and the ravages of ulceration wrought by Crohn's disease. 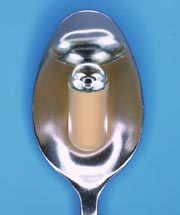