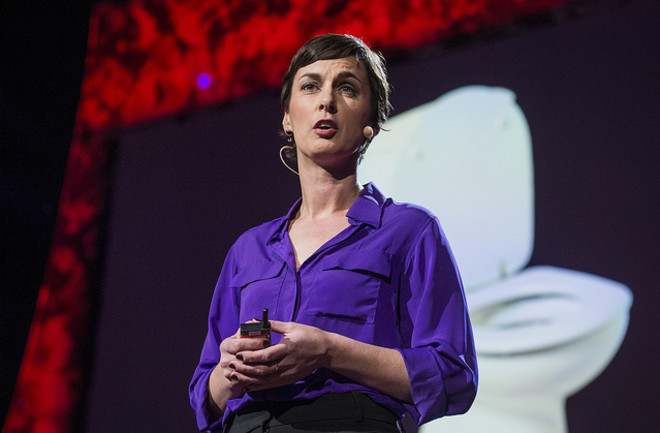 Rose George, sanitation champion, at TED2013. From the hidden life of microbial ecosystems, to cybercrime, to the long chain of consequences set into motion by not washing your hands after using the toilet, Thursday’s TED 2013 spotlight illuminated the unseen systems of our world that impact all of us, sometimes fatally. “Diarrhea is a weapon of mass destruction,” declared Rose George on TED’s main stage Thursday afternoon. George is on a crusade for better sanitation, which has brought her from India to Africa to the tony conference space at Long Beach, where she pointedly noted she’d washed her hands after a trip to the toilet. George told the audience that though diarrhea kills a child every 15 seconds and can be easily and cheaply prevented, it rarely receives the attention given to diseases such as malaria, which kills fewer people per year. George’s book

wades deeply not only into the dangers of poor hygiene but the benefits of waste if managed correctly: “Waste is a resource that we’re wasting,” said George, who added fecal matter can be an “inexhaustible and infinite” energy source.

TED Fellow and marine advocate Ghislaine Maxwell addressed a different kind of waste in her Thursday morning talk, showing the audience disturbing images of ocean “dead spots.” Maxwell is far from the first person to call attention to the plunder of the seas through overfishing, dumping and other destructive practices, but her solution is fairly novel: promoting the idea, established as far back as Emperor Justinian in the sixth century, that the oceans legally belong to the people of the planet, not governments or corporations. Though Maxwell’s call for us to claim ownership and become stewards of the seas may sound unrealistic, the campaign appears tailor-made for social media-based advocacy.

Jessica Green at TED U. Back on land, Jessica Green, director of the BioBE Center at the University of Oregon, is calling for more mindful stewardship of a different kind of ecosystem: the vast microbial ones living in our homes, our office buildings, our cars, our phones and every other inch of our surroundings. Green’s research has turned some long-held beliefs on their heads: while modern hospitals typically strive for sealed, controlled environments, Green found healthier microbial communities—leading to better patient outcomes—actually resulted when windows were opened and more of the “wild” microbiome was allowed inside.

Decoding animals - and us

Not so much unseen as unheard (at least by humans in its higher ranges) and generally not understood, the language of dolphins may soon be decoded. Behavioral biologist Denise Herzing said she plans to try a prototype, mobile computer this summer in the Bahamas as her next step in researching two-way communication between humans and wild dolphins. The Interspecies Internet (I2I), announced Thursday by an all-star quartet, has even loftier goals of animal interaction. Internet pioneer Vint Cerf, MIT’s Neil Gershenfeld, dolphin researcher Diana Reiss and musician Peter Gabriel took the stage together to introduce the “new interface” that would not only allow self-aware animals such as orangutans and elephants to communicate with us, but could give us tools to use to converse with extraterrestrials, should we happen upon any that want to talk to us. The I2I currently is more theory than practice, but this could be the first step to a new kind of cute cat video online.

James Lyne, cybersecurity specialist, at TED2013. Sophos cybersecurity expert James Lyne caused the most noticeable and awkward collective squirm during a presentation on the ease with which anyone can access our personal data through our WiFi use. Lyne listed a series of stats he’d legally obtained simply by monitoring the WiFi networks used in the conference space over the past three days. Noting that 2 percent of TED attendees were prone to excessive profanity and 23 percent had recently checked their email or surfed the web at a Starbucks, Lyne added that he had learned the home addresses of 234 attendees. No word if Ben Affleck was among the attendees Lyne zeroed in on, but the Oscar winner was in the house to introduce the Instruments of Peace, an orchestral project from Kinshasa.

Ideas to infinity, and Canada

As TED 2013 winds down in Long Beach, organizers are already looking ahead to next year, its 30^th anniversary. The annual conference will move from California to Vancouver, Canada, a move prompted by the opportunity to build a custom theater that TED Curator Chris Anderson promised will offer “a more intimate connection” between the speaker and audience. Anderson added TED would continue evolving into “an infinity of ideas,” including an upcoming website redesign offering more user-friendly ways to find and sort videos of interest. The annual TED conference, which turned 29 this year, features speakers from multiple disciplines delivering brief talks (four to 18 minutes long) on innovations and ideas in the areas of technology, entertainment and design. Presenters and audience members have a broad and international range of experiences, and include renowned scientists, visionaries, celebrities, artists, venture capitalists and corporate leaders.