Technology Is a Gas: "Pull My Finger" Takes iFart to Court 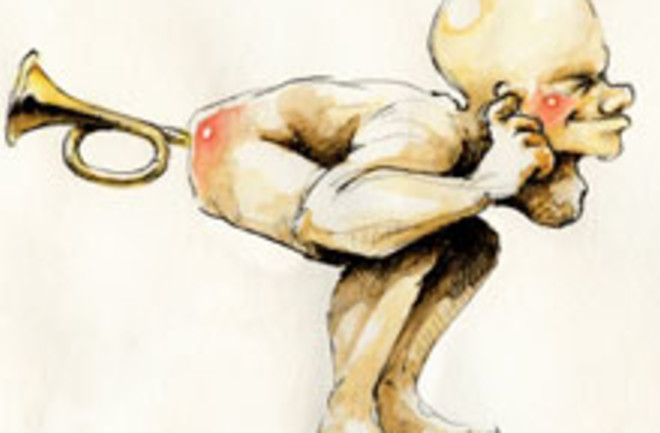 No, the Internet isn't just for porn—it's also for downloading programs that simulate human flatulence. CNN reports that a Florida-based company may bring suit in federal court against a Colorado competitor, alleging trademark infringement and unfair business practices over the phrase "Pull My Finger." The battle for the lowest common tech denominator began when Apple approved the application "iFart," which went on to become one of the most popular apps for users. If you're wondering what it does, the name pretty much says it all—press a button, and the melodic sounds of flatulence ensue. Of course, things got messy when iFart's predecessor, an application aptly titled "Pull My Finger," got, er, wind of its new competition. The throwdown was officially declared when iFart began using the eponymous phrase "Pull my finger" in its ads. IFart, j'accuse! The issue will likely come down to whether or not a common colloquialism like "pull my finger" can be copyrighted as part of a Web application's "unique brand identity"—and, for that matter, whether either of the two applications can really be called "unique." As far as functionality, they're pretty much identical, though iFart has a few additional perks to its credit, including a "stealth" feature that lets you set your flatulence sounds ahead of time, and a security feature that emits charming noises anytime the phone is moved. And as an added bonus, it safeguards against the forces of decency and taste. Related: Disco: The Good Old Days, When Psychologists Used to Hang Out in Toilet Stalls Disco: The Secret to Why French Fries Smell So Good: Ironing Boards?Image: iStockPhoto