• A Camera Is My CopilotIt will scrutinize your face more intently than a new love, but it will also scold you as sharply as Mom would if you're not paying attention. FaceLAB, unveiled in March by Seeing Machines, is a smart video-monitoring system that can sense if a driver is distracted or drifting off to sleep—situations that researchers at the National Highway Traffic Safety Administration say may account for half of all motor vehicle accidents. Unlike previous incarnations of eye-tracking technology, FaceLAB requires neither bulky headgear nor infrared illumination of the subject's cornea, so it can follow eye movements right through eyeglass lenses and is almost impervious to fluctuating light conditions. Alex Zelinsky, Australia National University professor of robotics and CEO of Seeing Machines, says his lab began developing the system in order to build a robot that can fetch objects chosen by a disabled user; the robot proceeds by monitoring his or her gaze.

FaceLAB now exists only as a prototype. A version for cars and trucks is likely to consist of two lipstick-sized video cameras mounted on the dashboard that continuously monitor the driver's entire head, transmitting the image to a computer with software that can track up to 18 points on the face. — Christine Soares

• A Vote For SimplicityTwo weeks after the presidential election, while debates still raged about dimpled chads, the Massachusetts Institute of Technology and the California Institute of Technology launched the Voting Technology Project to figure out how to prevent a repeat of the Florida debacle. "It is remarkable that we in America put up with a system where as many as six out of every hundred voters are unable to get their vote counted," said Caltech president David Baltimore. "Twenty-first-century technology should be able to do much better than this."

After months of research, project members concluded that lever machines, punch cards, and Internet voting schemes all have flaws. The surprising alternative: Rely on old-fashioned paper ballots and optical scanners. "It's not so much that it's low-tech," says project leader Thomas Palfrey, professor of economics and political science at Caltech. Optically scanned paper ballots allow for what Palfrey describes as "modular voting architecture," meaning the steps of voting—registration, marking the ballot, voter confirmation, and counting—are kept separate. Combining these steps into one machine, he adds, "sacrifices security and auditability." And once a county has invested in a single all-encompassing system, it's hard to change. "If you buy a lever machine, that's what you've got. They weigh almost a thousand pounds. They're gigantic. A producer brought a unit over to MIT, and they couldn't fit it in the elevator." — Michael M. Abrams

• The Big ChillAs brownouts plagued California last spring, an experiment at a century-old power plant in the Midwest provided hope for relieving electrical grid stresses. In May, workers at Detroit's Frisbie substation replaced nine cables made from 22,000 pounds of copper with three superconductor cables containing 800 pounds of an exotic material that delivers three to five times more energy per cable. The composite of silver, bismuth, strontium, calcium, and copper oxide in the new cables must be cooled to -321 degrees Fahrenheit. So it is woven around tubing that can carry frigid liquid nitrogen, and the entire package is then wrapped in insulation. Such superconductor cables are unlikely to be used soon in long-distance transmission. But replacing inefficient copper wires that carry electricity short distances in big cities could go a long way toward delivering more power without building new plants. — Tom Dworetzky

Last March, British engineers at the University of Warwick's Advanced Technology Center announced a process that creates strong new automotive plastics that can eventually be composted. In recent years, plastic parts from junked autos have been piling up in landfills. But automakers have shied away from using biodegradable plastics, which are generally pricier than conventional plastics. The Warwick research team, led by Nick Tucker, found that starch-based biodegradable polymers could be reinforced with short lengths of elephant grass originating in Southeast Asia. The bamboolike grass links with the plastic to create a composite material strong enough for a wide variety of auto parts such as dashboards. And when the parts are junked, they can be broken down into compost for future starch crops. "Car manufacturers are increasingly being called on to have a strategy in place to dispose of vehicles environmentally," says Tucker. "We think they'd welcome car parts that can simply degrade." — Diane Martindale 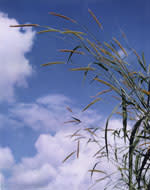 Capable of reaching a height of 10 feet, elephant grass is native to Asia but can be grown in England and the United States.Photograph by Tom Tavee

• Fingernail-Sized Palm-PilotsThe future of computers got much smaller in August when IBM researchers in Yorktown, New York, announced they had built a complete computer logic circuit from a single carbon nanotube molecule. One day 10,000 nanotube transistors will fit in the space taken up by a traditional silicon transistor.

Searching for an industrial design project for a course at London's Brunel University, Robin Southgate began tinkering with his toaster—and his computer. "I thought if I could somehow connect my toaster to the Internet, I wouldn't need a display screen," he says. "That's because the toast would become the screen." 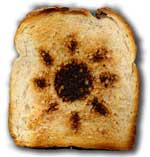 And thus was born the world's first toaster that burns the daily weather forecast onto a slice of bread. Southgate's contraption plugs into the Internet by modem, then downloads the day's forecast from a Web site he designed. The bread toasts normally at first, but in the last half minute a stencil in the shape of a sun, a cloud, or raindrops rolls out over the heating element and burns an image onto the toast. "It works with brown bread," says Southgate "But it's best with white."

Southgate, who graduated with honors and is now in New Zealand studying philosophy, plans eventually to look for a job as a product designer. As for the weather-toaster, at least three manufacturers expressed a passing interest in the device, for which Brunel owns the intellectual property rights. "I'm amazed," says Southgate. "I can't imagine anyone actually wanting this." — Curtis Rist

• Is that Mouse Chip a Dog?

DNA microarrays—tiny wafers with coding information for genes stuck onto a silicon or glass grid—have revolutionized biomedical research by allowing researchers to screen individual DNA samples against thousands of genes simultaneously. "We can do in three days what would have taken a technician 12 years going gene by gene," says Andrew Brooks, director of the Functional Genomics Center at the University of Rochester Medical Center in Rochester, New York. But there's a caveat: "If that array of genetic content is not accurate, it makes data interpretation virtually impossible." 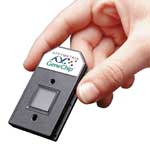 That nightmare scenario came true for Brooks and a host of other researchers last spring when a popular DNA microarray design proved to be faulty. The GeneChip Murine Genome U74 (right), which is manufactured by the California-based company Affymetrix, contains information for 36,000 mouse genes. The chip's designers, says Affymetrix spokeswoman Anne Bowdidge, used public mouse-genome databases maintained by the National Center for Biotechnology Information in Bethesda, Maryland. Because of uncertainties about the orientation of DNA fragments, workers inadvertently jumbled some of the microarrays. That led to faults in 25 percent of the information within the microarrays and disrupted thousands of research projects across the country. "It hit many of us very hard," says Brooks.

Affymetrix quickly corrected the problem and issued new microarrays. But Bowdidge acknowledges that genetic information from the public domain "is still incomplete for the majority of model organisms." More worrisome, says Brooks, are privately held databases for which there is no public monitoring. "The genetic content that goes on a microarray is as important as the technology itself," he says. "And the questions of who is supplying this information, how reliable is it, and what kind of proofreading process is in place are things that we're all now beginning to ask." — Curtis Rist