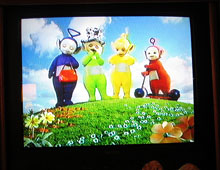 Do you dream in color, or black and white?The answer may depend on the TV you watched as a child.New research shows that baby boomers who grew up watching black and white TV still often dream in grayscale while their kids dream only in color.

Eva Murzyn of the U.K.’s University of Dundee asked 60 people, half over age 55 and half under 25, to keep detailed dream diaries.She also collected information about the kind of TV and films they watched as children.More than 20 percent of the older group reported having black and white dreams, but less than 5 percent of the younger group reported them.A few of the older subjects who’d been exposed to color film and TV as children also rarely dreamed in black and white.The shift in dream palette directly coincided with the popularization of color TV in the 1960s.(It also means that pre-TV generations would have dreamed only in color.)

People often enter a heightened state of emotional awareness while watching their favorite TV shows, and Muryn says that the most impressionable slot may be between the ages of 3 and 10, when people start to remember their dreams.She also recalled an avid gamer who said he dreams as if he’s in front of a computer screen.

Considering the end of analog TV (effective February 17, 2009) and the rise of TiVO, pretty soon we’ll all be dreaming in high-definition fast-forward.