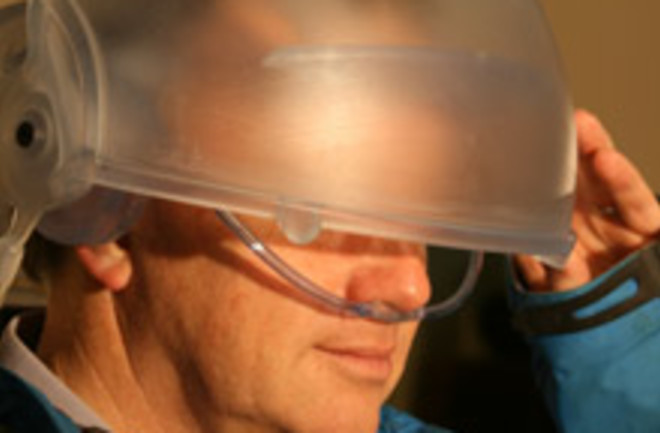 Imagine what it would be like if you could instantly feel the heat of the Aruban sun, smell the ocean, and hear the sound of waves on the sand as you sip a Caribbean cocktail—all without leaving your living room. U.K. researchers from the University of York and the University of Warwick are hoping their new virtual reality gadget will allow people to do just that, essentially becoming "virtual tourists." While virtual reality has been used in video games, helped soldiers cope with war trauma, and even allowed a women to commit "virtual murder," the experience has been limited to two senses (sight and sound). But the new Virtual Cocoon helmet can mimic all five senses, so that people can truly experience the trip. The Daily Mail illustrated how the machine actually works: 1. First, a complete record of a place is taken. Everything about the smells, sights, sounds and tastes are captured on camera and other devices. 2. The data is then sent to a satellite. 3. The “virtual tourist” at home receives the satellite data on his or her computer, and then the information is relayed through the Virtual Cocoon. Once a person puts on the helmet, he sees images on a HD screen that are far better than the images typically seen on TV. He smells the salty ocean when chemicals are released through a tube that is positioned right by his nose. And when a “squirting” device sprays sweet, sour, meaty, salty, or bitter flavors directly into his mouth, he gets a taste of the local cuisine. Surround sound can bring in the noising stream of cars in New York and fans and heaters can create the heat and humidity that you’d feel in Florida. Don’t hold your breath: the device is still in development stage. When it’s ready though, the Virtual Cocoon might revolutionize the way humans experience the world. Related Content: Reality Base: Virtual Reality in the Muslim World 80beats: Body Swapping DISCOVER: Jaron’s World: Virtual Horizon