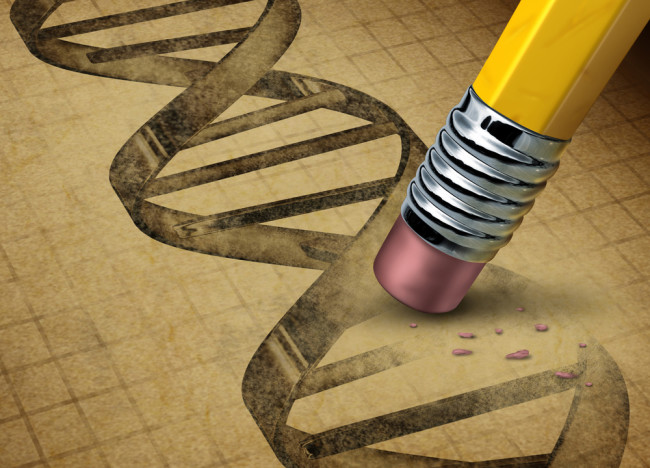 The world’s most powerful gene-editing tool, CRISPR-Cas9, gives humans the ability to swap out sections of the genome with less money and time than ever before. That’s a lot of power, and with great power comes great responsibility. But right now, most of the world doesn’t have regulations about what scientists — and someday, hobbyists — can and can’t do to the double helix. In China, scientists have used CRISPR-Cas9 to modify human embryos. And that has left the rest of the world a little nervous.

Using CRISPR-Cas9, scientists can “knock out,” or disrupt, particular genes and then see what changes in the organism. If, to create a badly simplified example, they disrupt a given series of base pairs from a rabbit, and the animal's nails stop growing, they learn that those genes governed rabbit nails. CRISPR-Cas9 also allows scientists to replace the snipped genes with different sequences, an ability that prompted Wired magazine’s July cover: “No hunger. No pollution. No disease. And the end of life as we know it. The Genesis Engine.” While those short sentences are a bit dramatic, CRISPR-Cas9 does represent a revolution in gene editing. Scientists genetically engineered organisms before CRISPR, but the techniques were time-and-tedium-intensive and much less precise. Among other problems, edited genes ended up where no one intended them to be and edits were unevenly distributed among cells. On top of that, scientists could only edit one gene at a time. CRISPR-Cas9, on the other hand, is reliable, fast, cheap, and accessible.

At a symposium at Stanford University’s School of Public Policy on Nov. 11, Hank Greely, director of the Center for Law and Biosciences, explained how important this shift is. “This is the Model-T of genome engineering. Think of how much cars have changed the world,” Greely continued. In the hundred years since their mass production began, they have become almost ubiquitous and have changed the way we interact with the world, in addition to changing the environment. Now imagine the world a century from today, 100 years after the everyman’s gene-editing technique was invented. Scientists are just beginning to explore CRISPR-Cas9’s potential, which is as big as your DNA is long. And that’s presenting a problem. Different countries have different restrictions on what people can and can’t do to twist up that tiny double helix. In the US, the National Institutes of Health won’t fund research that involves editing human embryos. But no formal ban exists, unlike in 15 of 22 Western European nations. In September, though, British scientists asked permission to modify human embryos. And in China, scientists already have.

Biologists led by Junjiu Huang of Sun Yat-sen University in Guangzhou announced in April that they had used CRISPR to scissor through 86 human embryos’ DNA. The embryos, obtained from fertility clinics, were “non-viable,” meaning they would not have become living babies. They edited the gene that causes a blood disorder called beta thalassaemia, replacing the ill-begotten base pairs like you’d splice a new section of pipe into your basement plumbing. Seventy-one of the 86 embryos survived the swap, and scientists then genetically tested 54 of the survivors. The snipping procedure had worked for 28 of those, but the swapped-in stuff only stuck to a few. Huang claims their poor success rate is why they stopped. “It works well,” said Marius Wernig, a Stanford professor of pathology and a participant in the November panel. “But it doesn’t work perfectly well.” Chinese scientists have also been screwing around with pooches, according to an October report. A team led by Liangxue Lai of the Guangzhou Institutes of Biomedicine and Health knocked out a gene encoding the protein myostatin, which regulates how much muscle the body makes. They created bulked-up beagles with guns (and abs and delts) twice the size of their non-modified peers. One can easily imagine a dog industry in which you can buy a truly designer canine companion. Already, a company called BGI sells CRISPR-created micropigs, whose cuteness will set you back $1,600.

But really, are GMO pets something to worry about? Should there be bans on scrambling up animal strands? After all, we’ve been genetically altering dogs for eons. That is, in fact, why dogs exist at all: because we genetically modified their wolf forebears. We have bred them over generations to our liking, with their pug noses and their hypoallergenic coats. CRISPR is really just a way of speeding that process up, so you don’t have to wait centuries for a dog with herding instincts, a short tail, and a low shed rate. 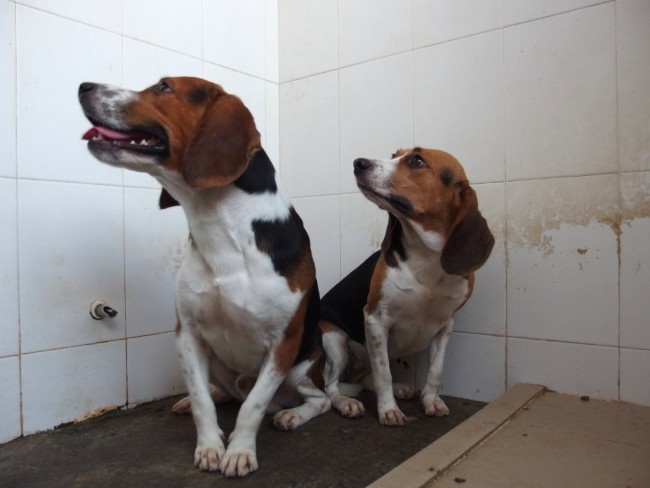 These two pups were the first beagles to have their genome edited with the CRISP-Cas9 technique. (Credit: Liangxue Lai) “Evolution is no longer gradual or subject to chance,” said Antonio Regaldo in the MIT Technology Review. “It is immediate and under human control.” And that’s a lot of power, and a lot of responsibility, especially in light of the inconsistent international regulations. A scientist could create an animal that has a terrible life — an animal whose life begins with Parkinson’s, or one that just keeps gaining weight, or one that just keeps gaining muscle. Of more concern than the specific changes, in the minds of some scientists, is that the changes could be passed down from generation to generation if they are made to germ cells, or sperm and egg cells. Modified germ cells become modified embryos — when a sperm and an egg meet. These seeds divide over and over again, growing into all the cells that become an organism’s body. The germline DNA is the DNA that can commingle with the DNA of another species member (when two members of a species really love each other) to form offspring. We can’t know how a particular modification will affect the species as it makes its way down the future family tree. “I think there’s an ethical dilemma in making decisions that affect future generations,” said Greely. On the other hand, he continued, “everything we do affects future generations.”

We may not know how CRISPR’s hacks will trickle down to future generations, but we can anticipate purposefully sinister possibilities, especially once a Tesla (as opposed to Model-T) version of CRISPR-Cas9 exists — like a version that works reliably on viable human embryos, for example. Soldiers beefed up like those beagles in China? Bioterror weapons that are wickedly virulent? Diseases designed to target a specific ethnicity, or only those with Y-chromosomes? Wernig wasn’t disturbed about these possibilities and said that actively regulating against them right now would be a waste of time. He believed they were so far removed from current reality that they weren’t worth worrying about. Milana Trounce, another Stanford panel member and an emergency medicine doctor who teaches a course on biosecurity, believed that CRISPR was going to become so good, so fast, so cheap, and so accessible that DNA-hackers in their garages would be able to do whatever experiments they wanted.

It’s better to have policies in place before something becomes a problem. The law is full of outdated policies that don’t adequately address current technology — laws that punish 17-year-olds who have naked cell-phone pictures of themselves as sex offenders for possessing child pornography, or unclear copyright rules about selling a digital version of a song secondhand. And that is part of why the Chinese Academy of Sciences, the Royal Society, the U.S. National Academy of Sciences, and the U.S. National Academy of Medicine will join together to discuss human gene editing in December, which could lead to getting international standards officially on the books. The human part of it all, because we are self-centered and also rule this pale blue dot, concerns us — and the upcoming summit agenda — most. Should we let ourselves mess around with humans’ future using a still-immature (if revolutionary) technique? And what if some nations decide we should and some say we shouldn’t? It’s not hard to imagine a sci-fi novel in which one country breeds superior children and takes over the world (sorry, the novel in which no one has Parkinson’s or beta thalassaemia is never going to top the best-seller list). In the nearer-term and less-creepy future, though, if some countries allow germline modification and others don’t, the former will have a whole field of research that doesn’t exist at all in the nations where that research is banned. If a country or two started to have human CRISPR-tastic success, those with a ban might consider lifting it. On this topic, Greely quoted Laura Butcher, his physician wife: “‘Never be the first person to prescribe a new drug,’” he said. “‘But never be the last.’”