Take This, Tom Cruise: Data Gloves for the People! 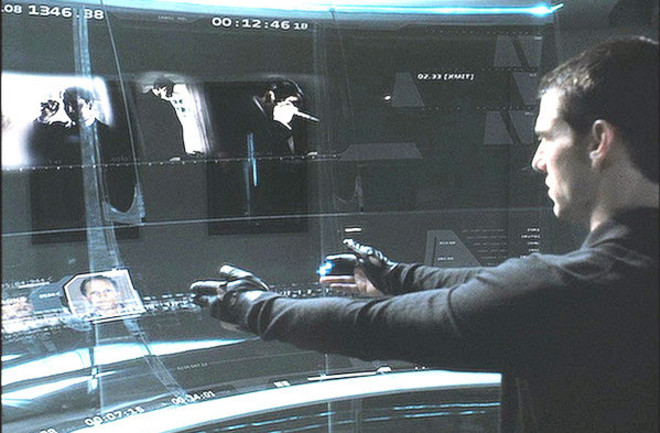 OK, Tom Cruise's data gloves in Minority Report are slicker than the AcceleGlove, no doubt about it. Remember him, standing all cocky and Cruise-like in front of that glass panel, watching images and data flicker before him? With precise gestures, Cruise zoomed in on images, moved them around with a flick of his wrist, and dragged up new ones. With an inadvertent gesture to shake a man's hand, he tosses a row of pictures off the side of is display. Cruise's gloves even have lights glowing on each fingertip.

The Acceleglove is clunky and ungraceful by comparison. The cloth is thick, because it has to conceal circuitry, and long metal rods reach from the wrist up past the elbow to capture arm motion. (Former DISCOVER columnist Jaron Lanier pointed out that one problem with the interface that Minority Report made famous was that it caused a lot of arm fatigue; presumably, the metal rods will not improve that situation.) Sometimes warts emerge when a sci-fi device becomes real.

Earlier versions of the data glove have been around for years in the form of motion-capture suits or virtual-reality gloves (and, of course, the old-school Nintendo Power Glove). Fifth Dimension, a leader in virtual-reality equipment, has gloves that run from $2,000 to $40,000 for a top-of-the-line, 21-sensor, wireless pair. But those prices have limited it to high-end markets, like mainstream motion pictures and TV commercials.

The Acceleglove, which will come in at about $500, uses an accelerometer in each finger to measure its position. These devices measures use tiny crystals to measure changes in the finger's orientation with respect to gravity, the force that puts the "accele" in accelerometer. (Accelerometers tell iPhones when to switch between portrait and landscape mode, and they're used in laptops to turn off the hard drive the poor thing is dropped.) As a finger of the glove moves, the crystals' charge changes, indicating the finger's location and orientation to a computer. The accelerometers transmit the data to a circuit board at the back of the hand, which in turn uses a USB cable to link to a computer. (Here's a demo video.)

Applications for the Acceleglove are still under development, but there are some pretty nifty ideas out there.  Researchers at George Washington University (where the glove was first developed) hope to use the glove to allow speakers of sign language to translate their signs directly into text on a computer screen, or even into speech. The military, naturally, wants to use the gloves for fine control of unmanned drones, and games makers see incredible new forms of entertainment entertainment.

The AcceleGlove is also easily capable of manipulating images on a screen, like a mouse, and it hardly seams a stretch to imagine that one day we too will be able to say, Scotty-style, "Keyboard. How quaint."