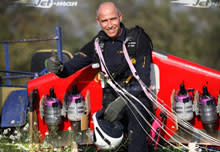 A Swiss man with a jet-powered wing strapped across his back jumped from a plane at an altitude of 9,000 feet today, and blasted across the 22 miles that separate Calais, France from Dover, England. The adventurer, Yves Rossy, became the first person to complete a solo flight across the English Channel using a jet-powered wing, which he could steer only with the movements of his head and back.

Rossy, whose day job is an airline pilot, traced the route of French aviation pioneer Louis Bleriot who became the first person to fly across the Channel in a plane 99 years ago [The Mirror].

Like many other aviation enthusiasts before him, Rossy wanted to find a way for people to get as close as possible to flying like birds. He started working on the project about 15 years ago, building prototypes in his garage [National Geographic News].

He took his debut flight over the Alps in May, and has been gearing up for the Channel crossing for months. The successful feat, which was postponed twice due to bad weather, was broadcast live, and observed by crowds on both the French and English coasts. The jet-powered wing that carried Rossy across the Channel is made of a light carbon-composite material, but his gear still weighs about 120 pounds in total. The wing

has four jet engines linked by digital processing equipment. "If one engine fails, the digital signal ensures that its opposite pair is shut down in half a millisecond," said [engineer Markus] Zipperer. "Otherwise his wing would go into a flat spin." At 5 inches (12.7 centimeters) across, his turbines are much smaller than conventional jet engines, although they use the same type of fuel [National Geographic News].

After Rossy jumped out of the plane at 9,000 feet,

he pulled a cord that sprang open his wings giving him a full wing span of just over eight feet. He dived for a few seconds to pick up a speed of around 200 mph and leveled out at around 5,000 ft [Daily Mail].

Upon reaching the cliffs of Dover he deployed a series of two parachutes to reduce his speed and then lower him safely to the field below. The entire flight across the Channel took less than 10 minutes. Image: ACT Composites