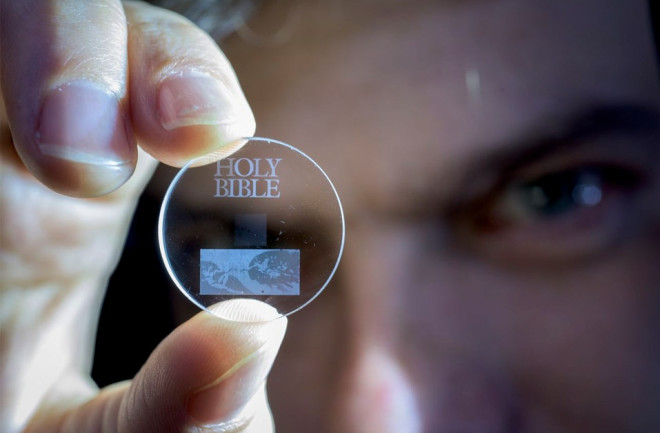 The King James Bible encoded onto the "Superman" chip. (Credit: University of Southampton) Millions of years into the future, whatever life-form occupies the planet — assuming this theoretical society still dabbles in archaeology — might hail the discovery of tiny, glass discs that contain the history of their ancient forebears. Researchers at the University of Southampton have created an "eternal" memory storage device that could preserve the story of human civilization long after we've departed. Their 5-dimensional data storage technology uses a combination of lasers and nanostructures to encode information in a fused-quartz glass disc. The researchers say their storage device could theoretically survive for billions of years.

The chips are just one inch in diameter, but the researchers say they can encode 360 terabytes of information, or about 45 years of YouTube videos. The largest single hard drive on the market today can store roughly 16 terabytes. Aside from its storage capacity, the chip can withstand temperatures of up to 1,800 degrees Fahrenheit, and has a projected lifespan of over 13.8 billion years at room temperature — making it essentially eternal, the researchers say. The chips, which beg allusions to Superman's memory crystals, could someday store large databases of information, such as the entire collection of works in the Library of Congress, safely and efficiently. The researchers presented their findings Wednesday at the The International Society for Optical Engineering Conference in San Francisco.

Packing in the Data

To create the devices, the researchers blast a disc of glass with intense femtosecond laser pulses, creating nanoscale etch marks within its structure that alter the polarization of light beams. The data is stored in three layers of nanostructured dots, and each dot can change the form and intensity of the laser beam. Since there are five variables in play, the researchers refer to the technology as 5D. When a laser is aimed at a completed chip, the pattern of light passing through the configuration of nanostructures can be read and reassembled with an optical microscope and a polarizer. In 2013, the researchers encoded 300 kilobytes — or about a six-page PDF document — of information using this technique as a a proof-of concept. [embed]https://www.youtube.com/watch?v=OP15blgK5oU[/embed]

The 5D data storage technique builds off prior research that used lasers to create voids in crystals to alter light and encode information. The void technique maxed out at about 50 GB of storage. Now, with the power of two additional dimensions, researchers have expanded the memory capacity of a glass storage device by a factor of 7,000. Although the technology has advanced rapidly, it still requires expensive lasers to write the data and read it — they're looking for private investors to commercialize the technology and bring it out of the lab. Researchers have already used their Superman chip to store important historical documents such as the Universal Declaration of Human Rights, the King James Bibles, Newton's Opticks and the Magna Carta. Those timeless texts will be with us, or whatever comes next, for a long, long time — until the sun, as predicted, expands and engulfs this planet.