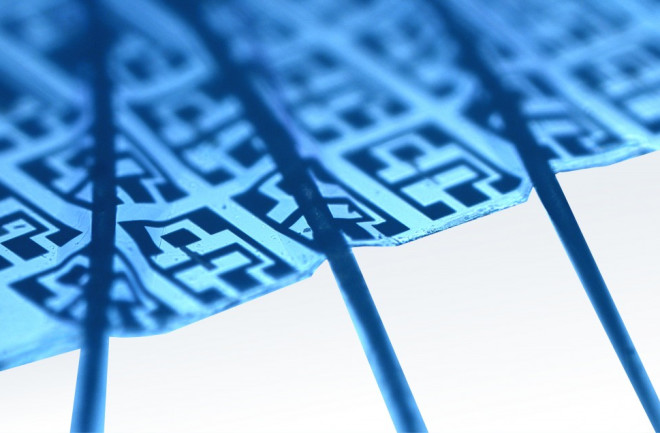 The electronic circuit draped over human hairs. Credit: Salvatore et al In another advance for biological electronics, researchers have developed a transparent ultrathin circuit flexible enough to wrap around a single human hair and still function. In a proof-of-concept the scientists deployed the circuit in a contact lens where it could someday measure changes in pressure as a monitoring tool for glaucoma. The team from the Swiss Federal Institute of Technology in Zurich reports today in Nature Communications that they were successful in creating a viable electronics circuit with a thickness of just 1 micrometer---or one-sixtieth the width of a human hair. The team built the tiny electronics out of two layers of polymer, etched with circuitry, backed by a silicon chip. When the chip was placed in water, the middle polymer layer dissolved, leaving just the electronic film. The electronics are super-thin and super-flexible. Even when they are crumpled up, six of 10 electronic devices continued to work. The researchers showed that the prototype electronics could function after they were transferred onto skin, plant leaves and fabric. They also added strain sensors to the circuitry and affixed the film to a contact lens on a fake eye, as a proof-of-concept for a pressure-monitoring contact lens for glaucoma sufferers.

The circuit, affixed to a contact lens, is displayed on a fake eye. Credit: Salvatore et al The applications are much broader than just contact lenses, lead author Giovanni Salvatore toldSmithsonian Magazine:

“I believe this technology can have important impacts in medicine and health monitoring... It could be used for very wearable and minimally invasive devices, for ultralight solar cells, and most importantly, for very conformable and implantable devices which can serve to monitor biometric parameters in the human body.”