Study finds men are more likely to think a woman's a floozy if she's just sitting next to a beer. 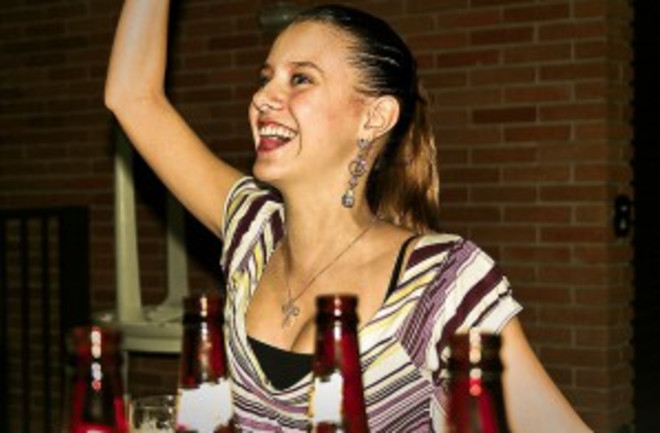 Photo: Flickr/Ninha MorandiniPrevious studies (not to mention our own experiences) have shown that men think drunk women want to get laid. But how much of that is drunk behavior, and how much is simply the presence of alcohol? To answer this question, scientists had participants watch one of two silent sixty-second movies of a man and woman interacting. In one version, the woman had a bottle of beer next to her, and in the other version, a bottle of water, neither of which she drank. The 69 male and 78 female participants were then asked to rate the couple on a number of different criteria. The results showed that men rated the actress as more flirtatious, promiscuous, and seductive when she was sitting next to the beer. This bias was much more pronounced in men than women, implying that it isn't simply due to broad social stereotypes -- although those probably don't help either.The effect of gender and alcohol placement in the processing of sexual intent. "INTRODUCTION AND AIMS: Alcohol consumption in women is known to be perceived by men as signalling sexual intent. However, it is unclear whether such assumptions extend to the simple presence of alcohol. The present study investigated the association between gender and alcohol placement on processing of sexual intent. DESIGN AND METHODS: One hundred and forty-seven sexually experienced male and female participants were shown a brief video of a social interaction between a man and woman depicted with a bottle of water or alcohol. Participants were then asked to rate the female target on sexual intent. RESULTS: Men inferred greater sexual intent compared to women in the female target when she was depicted with alcohol as compared to water. Contrary to previous research, personality traits did not contribute to perceptions of sexual intent. However, state (sexual-related) variables such as likely sexual relationship between targets and attractiveness of the female target, did increase the level of sexual intent processed. DISCUSSION AND CONCLUSIONS: These findings suggest that alcohol may be a cue used by men in their social environment to process sexual intent. The association of a woman with alcohol suggesting sexual intent could have potential implications for advertising practice which influences sexual beliefs toward women." Related content: NCBI ROFL: Lost in the sauce: the effects of alcohol on mind wandering. NCBI ROFL: Naturalistic observations of beer drinking among college students. NCBI ROFL: The effects of acute ethanol consumption on sexual response and sexual risk-taking intent.

Fundrise Review: Invest in Real Estate without the Headache