Stop Driving With Your Feet

HY-POWER STEERING The Hy-wire's X-drive control grips, which flank a rearview video monitor, can slide on rails for instant conversion to left- or right-hand drive (sequence above left). The grips are electronically linked to two motors, which direct the front wheels via rack-and-pinion steering gears. "Obviously, you don't want your steering motor to fail. That's why we have two," says Nicholas Zielinski, the drive-by-wire program manager for General Motors.

Fortunately, GM took a different tack. "We asked, 'What would we do if we invented the automobile from scratch today, given today's technology and today's global challenges?'" says J. Byron McCormick, executive director of GM fuel-cell activities. The response was the AUTOnomy, introduced at the Detroit Auto Show in January last year. It consisted of an six-inch-thick wheeled platform (dubbed the skateboard) into which engineers squeezed the fuel-cell stack, compressed-hydrogen tanks, system controls, heat exchangers, front and rear crush zones, and inside-the-wheel electric motors—all topped by a sleek roadster shell. The idea was that all the car's controls would be "by wire," meaning that steering, brakes, throttle, everything would be controlled by electrical pulses coursing through wires instead of the conventional mélange of mechanical linkages. But the AUTOnomy was just a prototype that wasn't drivable. Its successor, the Hy-wire, which made its debut at the Paris Auto Show last September, really is roadworthy. So recently I tooled around in this amazing car in the wet, empty parking lot of RFK Stadium in Washington, D.C. The fact that it runs on hydrogen has gotten the most attention, but making, storing, and transporting that gas in sufficient quantities to run the world's automobiles has a dubious future. Establishing a hydrogen infrastructure depends on an unpredictable mix of technological innovation, consumer acceptance, and government incentives. No one knows when, how, or if those planets will align. But almost everyone has missed the real innovation of the Hy-wire. It's not about fuel cells or hydrogen; it's about drive-by-wire. After climbing into the streamlined silver-gray sedan, the first thing I noticed was that everything is adjustable. The steering console, known as the driver-control unit, slides back and forth on rails, as do all of the seats. Switching from left- to right-side drive—a mechanic's nightmare—can be done in seconds with a gentle push. The next revelation was a refreshing sense of emptiness. Without a box housing an engine, or a steering-wheel column, or another box comprising a trunk, the automakers were free to take glass panes right down to the bottom of the car's snout and back end. That means the driver can see the road directly in front of and in back of the car. The most tragic of car accidents—running over an unseen toddler crawling near the front or back wheels—could become history with this car. Minimalism also rules the controls: Hy-wire development engineer Jeff Wolak, sitting next to me in the front passenger seat, started the car by pressing a single power button, creating a soft whir as the fuel cells kicked in. There are just four push-button power train settings: park, neutral, drive, and reverse. The real fun was driving entirely by hand, and it was surprisingly easy to master. "Reaction time is quicker with your hands than with your feet," says Nicholas Zielinski, manager for GM's drive-by-wire program. "Picking up your foot, moving it over, and putting it on the pedal just can't compete." Zielinski says today's teenagers, raised on a steady diet of video games, will most likely embrace hands-only driving, but their aging parents probably won't. No problem: A drive-by-wire car could accommodate both. "It's pretty easy to make a vehicle that works either way—a gas pedal pops out of the floor or retracts if you don't want it," he says. "You could even possibly have a steering wheel on some vehicles and a joystick on others; it's incredibly flexible." And the single skateboard chassis can also accommodate dozens of different bodies: pickup, van, sedan, even odd arrangements such as driver-out-front in a Plexiglas bubble. Swapping bodies simply requires battening down 10 connection points and plugging the control wire into a single port in the skateboard. I found acceleration sluggish but acceptable. The fuel-cell stack, roughly the size of a PC tower, powers a transversely mounted brushless DC motor that pumps out 60 kilowatts; by contrast, the hydrogen-fuel-cell Toyota I drove last year had an 80-kilowatt motor. So I cranked the grip all the way around. 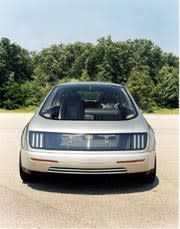 HY-VISIBILITY The front end of the Hy-wire features two windshields: a large, conventional upper pane for distance and a small pane mounted in the snout for viewing objects within roughly two feet of the bumper. Side visibility is impressive, too, because engineers eliminated the post between the front and rear doors. More than 30 patents protect the vehicle's innovations. Credit for the car's name goes to 14-year-old Aleksei Dachyshyn, son of a GM executive, who aimed to capture the car's two key technologies: hydrogen fuel and by-wire controls.

I am a pain at these drive-the-concept-car events; I like to go fast, which makes company representatives blanch. "You might want to avoid the puddles," said Wolak politely but firmly as I zoomed through a huge one (the electric controllers and harness connections on this prototype aren't sealed, he explained patiently). Fine. So I went for a couple of hard turns. No problem. I found the car extraordinarily stable, as well it might be, with most of its 4,180-pound weight concentrated in the bottom of the vehicle. Flipping a Hy-wire would take real initiative. Instead of rearview mirrors that would cause wind drag, the Hy-wire uses rear-facing cameras to beam video to a couple of high-resolution screens inside the cab. It also features low-rolling-resistance tires and regenerative braking, both designed to maximize fuel efficiency. Company officials were forthright about the challenge of range in hydrogen vehicles. "We are trying to get to 300 miles; now we are a little south of 200," says Timothy Vail, director of distributed generation solutions, part of GM's fuel-cell activities group. One way GM is looking to get there is to double the compressed-hydrogen tank's pressure from 5,000 to 10,000 pounds per square inch. Meanwhile, the blessings of drive-by-wire are already visiting American cars. "Throttle-by-wire is here in production vehicles—many of our vehicles have no mechanical linkage between the gas pedal and the engine," says Zielinski, noting that this allows a computerized controller to smooth acceleration and improve mileage. Some General Motors pickups and sport-utility vehicles also use optional steer-by-wire on their rear wheels to improve the turning radius. "We're learning," adds Zielinski. "And we're applying what we learn." No one can say where this education will lead. None of the other large automakers seems to think skateboards are inevitable, and they may be right. Dismal sales for GM's EV1 electric car, introduced in 1996, taught the company that "consumers would not buy a vehicle that did not fit their needs, no matter how advanced, no matter how environmentally sensitive," says Beth Lowery, GM's vice president of environment and energy. The Hy-wire and its descendants will need to be affordable, safe, easy to refuel, and generally nonthreatening, or they will most likely lose out to conservatively designed hydrogen cars from other companies—assuming mass-market hydrogen cars happen at all. On the other hand, Americans have a long history of embracing genuinely useful automotive innovations, and the Hy-wire definitely has its charms. Back home, stomping the creaky throttle of my aging Camry, I found I missed that twist-grip.

HY-CONCEPT The Hy-wire's 11-inch-thick aluminum "skateboard" platform (left) incorporates three high-pressure hydrogen tanks made of carbon composite, 200 single fuel cells connected in series as a stack, and a three-phase asynchronous electric motor with integrated power electronics. Popping on a new body (center) takes only a few minutes. The sedan shell (right) could easily be exchanged for, say, a pickup truck shell. This easy interchangeability will benefit GM as well as the public, says Timothy Vail, director of distributed generation solutions. "Today, GM has 68 models of car on 50 different platforms. If we could produce maybe three skateboard platforms—small, medium, and large—that would lower our structural costs." The company could then concentrate on making a wide variety of specialized body shells to serve niche markets, Vail says.

To find out more about the inner workings of GM's Hy-wire, check out this tutorial on the How Stuff Works Web site: auto.howstuffworks.com/hy-wire.htm.