Spy on the Inside: Underground Control Center for Texas' Power Grid

This room may look unfamiliar, but it is one of the most important places in your life. Without it, you could not count on your house being warm and bright, your food staying safe in the fridge, or your ability to charge your iPad or cell phone. Behind the modern world is a vast wired network transmitting electricity to consumers. We call it the grid, but it is not as neat and orderly as the name implies. The hodgepodge of connections evolved over 100 years from a patchwork of local networks, interstate transmission lines, and ad hoc fixes. It is divided into three parts—the Eastern Interconnection, the Western Interconnection, and Texas. Pictured here is the grid control center for the Electric Reliability Council of Texas. Generators and distributors of electricity depend on it to communicate and to prevent leaving customers with too much or too little power. The result would be a blackout. Even with control centers, the grid still flounders. Texas experienced blackouts in February 2011, as colder-than-average winter weather simultaneously increased demand for electricity and damaged coal-fired power plants and wind turbines. During the summer, demand for air-conditioning threatened a series of near blackouts. Operators in the control room can adjust some conditions, but eliminating the grid’s instability would require big change.

The Spy: Maggie Koerth-Baker, author of

Before the Lights Go Out,

a book about the electric grid and the future of energy in the United States. 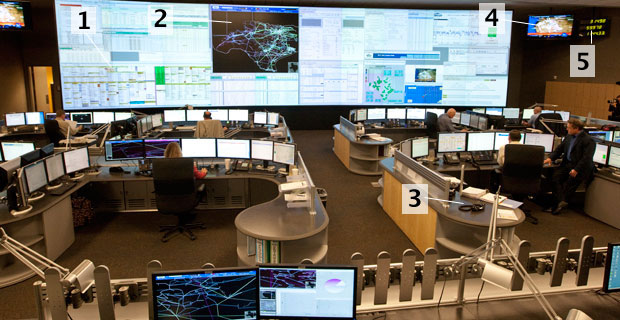 1. A River Runs Through It Power plants generate electricity, but they do not create anything from scratch. Instead, generators take electrons, which normally orbit the nucleus of an atom, and force them to move independently through the grid’s closed path. When too many electrons build up or their numbers in the system (monitored here) fall too low, you get a total loss of power: a blackout.

2. Needed: Grid RenovationBefore we can add more renewable energy to the Texas grid, represented above, we must renovate its aging infrastructure. One suggested boost is a giant storage battery to make up any shortfalls in power. Another is improving the distribution system so electricity can flow not just to but from consumers, wherever it is needed most.

3. Hands on Deck Human controllers at right and above can override computers if power is at risk. When generators fail, as they did last winter in Texas, controllers lean on “demand-response customers”—large electricity users, like factories, that are paid to be on call, ready to use a little less or even shut everything off at a moment’s notice.

4. Renewable Risk Our current, fragile grid evolved to work with steady energy sources like natural gas and coal. Wind and solar energy, which vary with outside conditions like weather (indicated here) and time of day, are so variable they can destabilize the current grid if they make up more than 20 to 30 percent of the supply.

5. Balance of Power To avoid blackouts, supply and demand must be almost perfectly balanced, a task given to controllers monitoring the screens. First they make daily forecasts of the next day’s electric demand and supply down to every five minutes. Then if they turn out to be slightly off, controllers tweak the balance by activating backup generators or asking some consumers to use less.