Spider-Soldiers of the Future Ascend Buildings With Ease 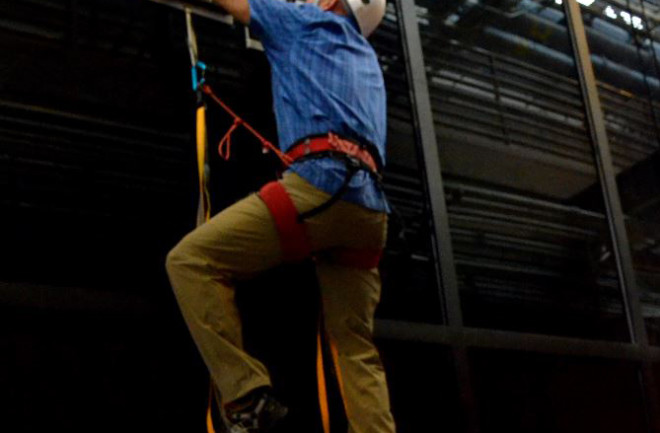 During testing, an operator climbed 25 feet vertically on a glass surface using no climbing equipment other than a pair of hand-held, gecko-inspired paddles. The climber wore, but did not require, the use of a safety belay. (Credit: DARPA)  Gaining the high ground in the throes of battle can mean the difference between victory and defeat, but getting to the top can be a challenge. To give United States soldiers the upper hand, DARPA is taking a cue from one of the animal kingdom’s best climbers: the gecko. With a name befitting a spy film, DARPA’s Z-Man program successfully demonstrated technology that allowed a full-grown man to scale a glass wall with no climbing equipment other than gecko-inspired paddles. The Z-Man program was created with the sole purpose of discovering a bioengineered wall-climbing method that trumped ropes.

A gecko can climb on a variety of surfaces with ease, and can even hang on to a window with just one toe sticking to the glass. Geckos’ clinging power resides in microscopic, hair-like structures on their toes called setae. Atop every setae rests hundreds of smaller tips called spatulae, which branch out and make contact with the surface. The structures work their magic due to what are called van der Waals forces – a weak force that draws molecules together. The gecko’s thousands of points of contact create a weak electromagnetic connection to the surface, allowing the animal to stick and unstick its feet with ease.

Based on the design of gecko toes, researchers created a flexible fabric that contained synthetic setae and spatulae, which they named Gecksin. In lab tests, a 16-square-inch sheet of Geckskin adhered to a glass wall while supporting a load of 660 pounds. (Watch the video below this article for more details about the creation of Geckskin.) Researchers then affixed Geckskin to paddles tailored for climbing. The paddles sufficiently supported the weight of a 218-pound man, carrying a 50-pound load, as he climbed a 25-foot tall glass wall. Each paddle bore more than 250 pounds of weight while the climber detached one paddle and repositioned it for the next step of the climb. The Geckskin climbing paddles aren’t ready for deployment in war zones, and there’s still more tests to be done, Discovery reports. Further, it isn't clear if Geckskin can adhere to other building materials such as concrete and wood. DARPA however clearly sees broader potential: in a news release the agency says its gecko-inspired adhesive could have potential biomedical, industrial and consumer applications. Perhaps the holiday-themed window cling market is poised for a shake-up?