Spaceport America Dedicates Its Runway; Flights *Could* Begin in 2011 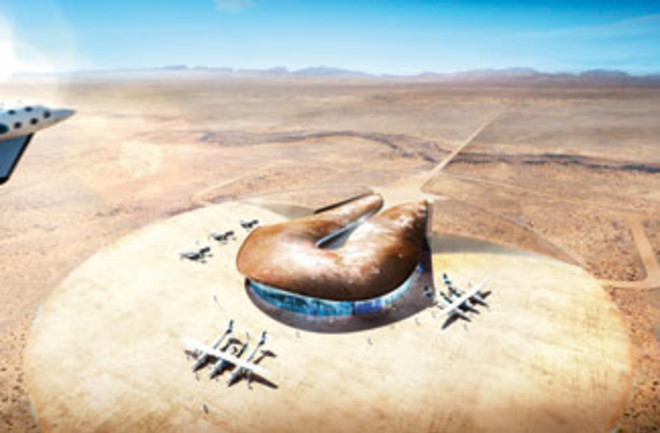 Its name may make it sound like an amusement park, but Spaceport America

is well on its way to being a real portal to space for the wealthy private citizen. Its construction is being funded by New Mexico taxpayer dollars and commercial space companies; it has already been designated the home of Virgin Galactic's space tourism operations. But the spaceport, located 45 miles outside of Las Cruces, New Mexico, is able to support a variety of spacecraft, and other commercial space companies are beginning to get involved

. The spaceport is scheduled to be fully operational in 2011. Virgin Galactic says it has already signed over 380 customers (at $200,000 a head) to take a two and a half hour flight to the edge of space (that includes a whole five minutes of weightlessness); some of the customers were present for the runway dedication today. Richard Branson, the company's founder, said that it will still be at least a year before their first tourist flight will take off. When that day finally arrives, the Virgin Galactic "mothership" will take off from Spaceport America's runway and soar to an altitude of 48,000 feet before releasing the spaceship VSS Enterprise, which will take passengers the rest of the way up.

"The mothership has been finished and flying for a while now," he said. "We'll do many, many, many test flights over the next 12 months to maybe 18 months before we actually send people up into space. But we're entering the last stages of the test program and we can see the light at the end of the tunnel now," he said. [AFP]

Science Not Fiction: Ralph: The Official Mascot of Space Tourism

Discoblog: Space Tourists Will Get Their Own Special Space Beer