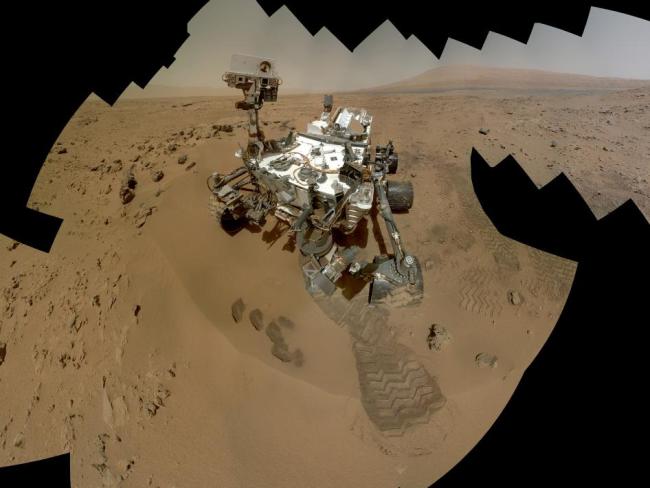 I’m never taking a photo of myself and sticking it up on Facebook ever again. How could anyone possibly contemplate it, when they’ve got to compete with self-portraits like this one? Thanks NASA. Really, there’s so much awesomeness in this photo. It’s a picture of a robot, taken on another planet. A freaking robot! On another world! Evidently though, not everyone shares this sense of wonder. At around the same time that Curiosity was taking pictures of itself, Felix Baumgartner was being interviewed by the UK’s Telegraph

“I think we should perhaps spend all the money going to Mars to learn about Earth. I mean, you cannot send people there because it is just too far away. That little knowledge we get from Mars I don't think it does make sense."

Disheartening words from someone who you would think would share so much in common with the Mars exploration mission, given his recent space jump

. Baumgartner’s words completely miss the point, because Curiosity’s story isn’t just about what happens on Mars. It’s also about what happened on Earth before it left, and what is still happening now. It’s the story of extraordinary life-saving technologies, like heart pumps and advances in drug treatments, but it’s also the story of ordinary, everyday things like mattresses, hockey sticks and baseball bats. These are technologies that NASA and its offshoot companies never originally set out to develop; instead, they were born out of ingenious solutions to practical problems faced in the space program. Take hockey sticks, for example. NASA has always been on the lookout for lighter, stronger, and more reliable materials to make vehicles and space station parts out of. So when a new type of carbon fiber emerged from Japan in 1991, they must have jumped at the chance to integrate it into their equipment. The materials in question were carbon nanotubes, discovered by award-winning physicist Sumio Iijima. Carbon nanotubes are tiny tubes of rolled-up graphite that are incredibly strong and stiff, much more than steel. Coupled with their light weight and electrical conductivity, nanotubes were an ideal material to replace bulky copper wires in the space shuttles. But their use didn’t stop there – in the early 2000s, NASA began working with other companies to develop new methods of engineering carbon nanotubes to make them usable on a commercial scale. The end result was a new technology called NanoSolve

, a better process for adhering nanotubes to surfaces. This allowed carbon nanotubes to be incorporated into materials for all sorts of equipment – like hockey sticks and baseball bats – while keeping the material’s strength and lightness. Here’s another example. Dave Saucier was a NASA engineer who was involved in projects dealing with space shuttle engines in the early ’80s. In 1983, he suffered a massive heart attack which resulted in the need for a heart transplant. While he was recovering, he started talking to the surgeon that performed the transplant about the state of the art in heart research, and whether technology from the space program could be put to good use in a medical setting. When Saucier eventually returned to work, he and a group of engineers and doctors spent the next few years developing a tiny, battery-operated heart pump

based on the principles of the hydrogen delivery system that served the space shuttles’ main engines. The pump has both long term and short term uses – it can be used as a temporary bridge, continuing to pump blood around the body in critically ill patients until a transplant is found, and it can also be used over a much longer term in patients who can’t undergo transplants. In its latest incarnation it also has Internet connectivity

, which allows the pump and the patient to be monitored remotely to check that everything’s okay. As of 2010, pumps had been implanted in 451 patients, including in 19 children, and hopefully many more will continue to benefit from it. It’s not just human health that’s benefited from the space program: buildings and machines suffer damage too, and it’s important to run them through frequent health checks to look for small vulnerabilities that could cause serious issues if left untreated. Of course NASA has a strong interest in structural integrity – no surprise for an agency specializing in shooting people off into space on top of a boatload of highly explosive fuel. In 2001, NASA started working with a company that had been developing a piece of kit called the Stanford Multi-Actuator Receiver Transduction layer, or ‘SMART’ layer

for short. The SMART layer is a thin film of sensors that can be built in to structures, and is based on the concept of ‘piezoelectricity’

: basically, whenever any material moves or deforms, a small amount of electrical charge is generated. SMART layer sensors amplify that charge so that it can be picked up by other sensors that monitor the overall structure. With the help of NASA, SMART sensor development was given a boost so that it could not only automatically detect structural defects, but also the presence of moisture, impacts, crack growth and more. It’s a deceptively simple technology that has life-saving applications, and is being built

into all sorts of things – from cars and planes to buildings and pipework. For example, BMW has recently started to use it during car manufacturing and design processes. So, while I have a huge amount of admiration for Baumgartner and his jump, he’s wrong on this occasion. We need programs like Curiosity – not just because of all of the amazing things we’ll find out about other worlds, but because of all the amazing earthbound technologies that’ll get developed along the way. That’s NASA’s hidden legacy, and it stares us in the face every day. Oh, and that cell phone camera you’re using to take photos? One in every three of them depend on technology

that was developed at NASA’s Jet Propulsion Laboratory in the 1990s. So maybe my pictures on Facebook have more in common with Curiosity than I first realized.