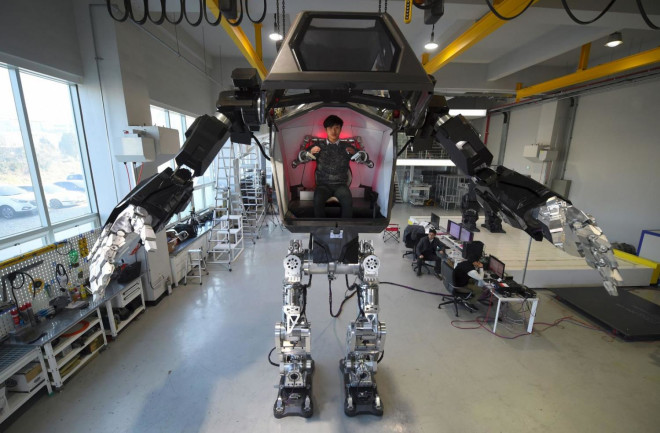 Back here in the 21st century, Yang Jin-Ho, CEO of South Korean robotics firm Hankook Mirae Technology, took the first baby steps inside his 13-foot-tall, 1.5-ton, manned bipedal robot called Method-2. According to reports, the thing shakes the ground with every step.

The 31st century doesn’t seem so far away.

Back in 2014, Jin-Ho did what any millionaire sci-fi devotee would do: spend $200 million to build a giant, piloted robot. To pull it all together, Jin-Ho partnered with Hollywood special effects veteran Vitaly Bulgarov, whose cinematic ventures into robotics include Terminator, Robocop and Transformers.

To control the robot, the pilot simply moves their arms and Method-2 mimics the motions with its 286-pound limbs. “Our robot is the world’s first manned bipedal robot and is built to work in extreme hazardous areas where humans cannot go (unprotected),” Jin-Ho told The Telegraph Tuesday.

Method-2, as you can tell, is still a bit clumsy—it’s still tethered power cable—but all the research that went into building it will reap tangential benefits for the company, Jin-Ho said. The team of 30 engineers plans to improve Method-2’s coordination and power systems over the next few years, and Jin-Ho says it could be ready for sale by the end of 2017 — for $8.3 million.

According to The Telegraph, Jin-Ho has already received inquiries about the technology from players in manufacturing and entertainment industries.