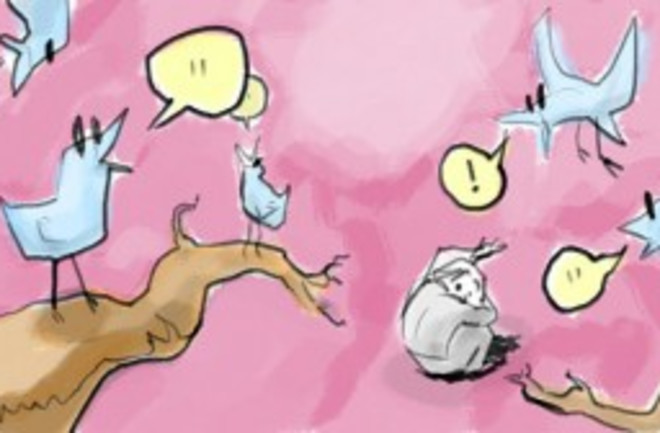 Image: Flickr/Pete SimonI don't know about you, but I find Twitter to be the most frustrating form of social media. (Perhaps it's simply because I'm just not pithy enough to limit myself 140 characters.) And on top of that, now we learn that Twitter might actually be bad for your mental health. If you are worried you might be in danger of "Twitter psychosis," you might want to compare your Twitter activity to that of this patient: "Approximately 1 year before admission, she had started to “twitter” excessively. Sometimes, she would spend several hours a day reading and writing messages, neglecting her social relationships and, sometimes, even meals and regular sleeping hours." The doctors treating this patient suspect that reading and trying to interpret hundreds of extremely short messages, many from spammers, induced the psychosis she experienced (see below for more details). #tweetatyourownriskTwitter psychosis: a rare variation or a distinct syndrome? "The authors believe that the amount of symbolic language (caused by the limitation of 140 characters per Twitter message), the automated spam responses with seemingly related content, and the general interactive features of Twitter might combine several aspects that could induce or further aggravate psychosis." "The authors report the development of psychosis in a young woman coinciding with excessive use of the online communication system Twitter and the results of an experimental account to argue that Twitter may have a high potential to induce psychosis in predisposed users."

"Unlike, for example, a story reported in the newspapers, which a psychotic patient may relate to, Twitter communication responds to changes in communication style. To test this, a test person created an account and responded to the messages of Ben Goldacre, the maker of the blog http://badscience.net. Our test person responded to a message of Mr. Goldacre about the pope, but Mr. Goldacre did not reply. However, the authors received an answer from an unknown participant, writing “@ Cold blooded RT. XXX: I am in the church:[link].” The link led to different Web pages with commercials. This message directly addressed the test person (@) with strong, personal words (“cold blooded”) as normally only a friend or close relative would do, and it seemed to link directly to relevant information (the place this seemingly close person was in). However, when the authors followed the link, they were confused about a flood of useless information (commercials). The authors understood that this was a spam message, but this might not be the case for a person who is predisposed to psychosis and, in addition, in a stressful psychosocial situation. The authors believe that the amount of symbolic language (caused by the limitation of 140 characters per Twitter message), the automated spam responses with seemingly related content, and the general interactive features of Twitter might combine several aspects that could induce or further aggravate psychosis." Related content: NCBI ROFL: Detection and management of pornography-seeking in an online clinical dermatology atlas. NCBI ROFL: OMG uv got chlamydia, srsly. NCBI ROFL: Who needs a doctor when you have Facebook?