Solving Pre-Crimes By Homing in on Sweat Gland Antennae 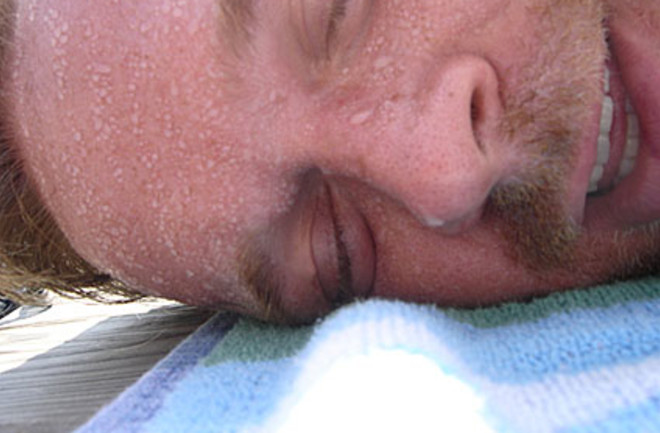 Researchers at the department of Applied Physics of the Hebrew University of Jerusalem can smell a lie from a mile away. Or, at least, they can detect changes in levels of perspiration from about 10 inches away, using millions of tiny antennae that cover our bodies—sweat glands. Sweat glands, it turns out, are shaped like tiny coils. Physicist Yuri Feldman had been spending a bit too much time in the applied physics lab, and when he saw the shape he thought of helical antennae in wireless communication systems. This gave them an interesting idea: The ducts might be able to send out an electromagnetic signal, enabling remote sweat detection. Because sweat can be linked to many emotional and physiological states, this technology could be extended to create a remote health detector or, more cynically, a lie or drug detector. The researchers built a machine that could detect the radiation reflected from the skin, which they patented with Yissum, the technology transfer company of the Hebrew University of Jerusalem. The company’s Web site notes that this remote sweat detector could be used to “identify suspects about to commit dangerous act[s], check for presence of drugs in the body, and ID individuals through unique patterns of sweat glands in the skin.” Ethical issues aside, there are big obstacles in getting this gizmo to fulfill those big claims. A guilty person probably won’t put the palm of their hand 10 inches away from your ominous sweat-sniffing machine—and and innocent person might sweat a fair amount when probed in such a manner all the same. And while there is evidence that sweat can be tested for use of heroin, cocaine, and weed, that works by chemical (rather than electromagnetic) analysis. So far, the researchers have only shown that the system can detect the quantity of sweat, not its chemical constituents. As for whether the sweat communicator can identify individual people, it’s difficult to believe that our sweat can really have such unique conductivity signatures, particularly in light of how dependent our sweat is on our physiological and emotional state. Image: alaspoorwho/Flickr