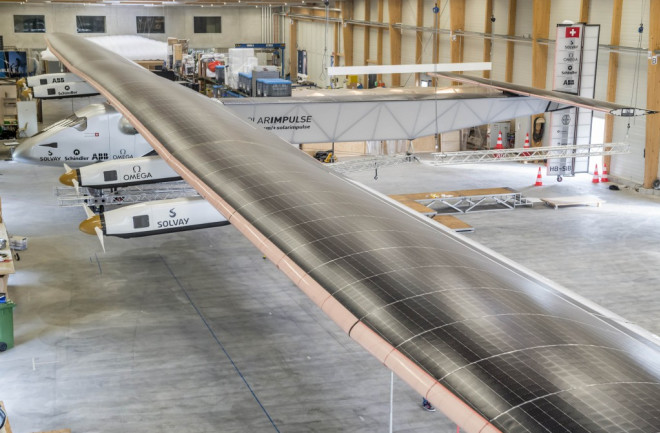 Solar Impulse 2, the single-seater solar airplane unveiled today. Courtesy Solar Impulse The world’s most advanced solar plane, the Solar Impulse 2, was unveiled in Payerne, Switzerland, today. The plane, which has been in development for 10 years, is the successor to a solar plane that flew across the U.S. last summer. The plan is for Solar Impulse 2 to fly around the world next year using nothing but sunlight for power — the first solar-powered plane to accomplish that feat.

Solar Impulse 2 builds on its predecessor in a few important ways: It has a bigger wingspan, a bigger cockpit — to keep a pilot comfortable for five days and nights in a row—and uses lighter materials. Despite its enormous size – the plane has the wingspan of a 747 – Solar Impulse 2 is somehow insubstantial. The tops of its wings are made up of glued-together solar cells. Most of the rest of the plane is covered in a silvery plastic film. The plane is a one-seater; the project's two directors, Swiss pilots Andre Borschberg and Bertrand Piccard, will trade off legs on the round-the-world flight, with stops in several countries along the way. The plane has a top speed of 40 miles an hour. To squeeze the maximum efficiency out of the solar cells, the plane only weighs about as much as an SUV.

Andre Borschberg and Bertrand Piccard at today's unveiling event. Courtesy Solar Impulse The plane has a cockpit that measures about 5 cubic yards, every detail of which has been designed for a pilot to live there for a week. It has a carbon-fiber frame and lightweight, specially-formulated insulation. However, for the sake of maximum energy efficiency, the cabin is not pressurized or heated – a further endurance challenge for the pilot. The new plane starts test flights next month.

The Solar Impulse project's prototype started flying in 2010, the first solar plane ever to fly day and night. Last year, Piccard and Borschberg took turns piloting Solar Impulse 1 across the U.S. in several stages, from the San Francisco Bay area to New York. The plane soaked up energy from the sun through the day, climbing to 27,000 feet, then glided slowly downward at night, drawing on its very efficient lithium batteries. The main difference is that this plane has to work for days on end – the cross-continental trip taken by Solar Impulse 1 only flew for up to about 24 hours at a time, whereas Solar Impulse 2 will need to make transoceanic flights. The team used new technologies and lighter materials to make the plane even more efficient. They also made the cockpit bigger and more comfortable for the pilots — and expanded the wingspan to support the bigger cockpit. Solar Impulse 2 is also more weatherproof than its predecessor, so the electronics can work in the rain. Last year, the team could wait to start each leg of the U.S. flight until the weather was clear. But for the upcoming flight, if it starts raining halfway across the ocean, Solar Impulse 2 will have to keep going (although the pilot will have a parachute, a life raft, and shark repellent, just in case).

Borschberg and Piccard will trade off legs of the round-the-world flight. They plan to start in March 2015 from somewhere in the area of the Persian Gulf. They will fly over the Arabian Sea, across India, Burma, and China. From there the plane will cross the Pacific Ocean and cross the U.S. before taking on another ocean, on its way to Southern Europe or North Africa – and then back to the starting point. Along the way, as with the U.S. flight, they will have several stops to switch pilots and hold public events and meetings. The project organizers’ hope is to inspire people to care about new, sustainable technologies. "You know, it's not the easiest way to fly around the world," Piccard says. The point is to get people to pay attention to sustainability — and to think that maybe saving the world can be exciting and fun. "If we didn't have this airplane," he told me, "nobody would care about what we think."