So, Did Tech-Lovers Get What They Wanted With Apple's iPad 2? 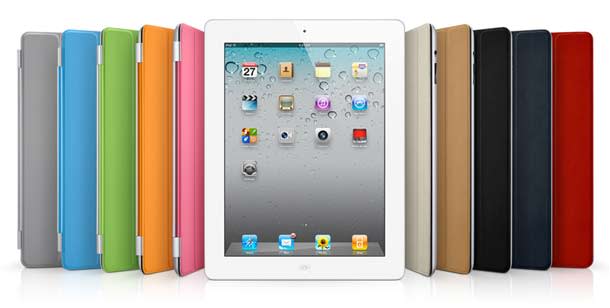 Tech bloggers can relax those fingers and recover from endurance live-blogging: The iPad 2 has been revealed by the turtlenecked wonder himself, Steve Jobs. Now that the world has had a look at the next-gen tablet, do its improvements satisfy the wants of the computing masses? No surprise, the specs are impressive. Apple's iPad 2 is one-third skinnier and 0.2 pounds lighter than its predecessor. It boasts cameras on both the front and the back, and a video camera which can sync up with iPhones for video chat. It has a 1GHz dual core processor but maintains the 10-hour battery life of the original. The base price is the same, $499, and it goes on sale in the U.S. on March 11. And yes, the rumors are true: It's coming out in white as well as black. The toys aren't bad, either. The new version of iPad's operating system includes Photo Booth, the standby application for taking gratuitous photos of yourself and mutilating them in new and interesting ways. The app iMovie—which has long been on Apple laptops—is on iPad now, too, allowing users edit film on the tablet. And Jobs gleefully spent much of the presentation fiddling with the iPad version of Apple's music creation program, Garage Band.

You can play a piano on the iPad, as well as a whole mess of other instruments. There's a button for a sustain pedal, and the virtual keys are touch sensitive. Play a key softly, the sound is soft. Play it hard, and the sound changes. The iPad uses its accelerometer to measure the force with which the keys are struck. [The New York Times live blog]

The next question is, so what? The iPad 2 is a nifty device that got a little bit niftier, and while Apple fans and first adopters may splurge for the new version, the lead-up to iPad 2 included a lot of rumblings by those who adopted the first version and were left wondering what they paid so much money for. Slate's write-up delved

into the author's rationale (and inspired a torrent of response

from iPad lovers and haters).

I didn't think about how it would fit in with the gadgets I already owned (laptop, Kindle, iPhone), and I didn't borrow a friend's and take it on a test drive. Now I just feel annoyed, having spent $600 on a device that hasn't done anything to improve my life. A salad spinner would have been a better investment, and I don't even eat that much salad. [Slate]

put forth many of the same cons: For all Jobs' talk about iPad as a world-changing device, it isn't the best at anything. E-readers are better for reading, laptops are better for working, and smartphones are more portable:

I can summarize this point by saying that a tablet doesn't really empower or inspire me to make anything that I couldn't make in an easier or better way with another tool; and when it comes to viewing, listening, reading, and surfing, I have better gear for those experiences, as well. So a new tablet will never be exciting the way that a new, luxury gel ink pen will be exciting, or a new leather journal, or a new HDTV, or a new digital camera, or a new game console, and so on. [Ars Technica]

Even Ben Kuchera at Ars, who argues the pros of tablets

including their gaming chops, their mobility, and their content versatility (books plus comic books plus magazines and more), concludes on a disappointment: iPad could be so much more—and perhaps achieve those lofty rhetorical goals of creating the post-PC future—if it weren't limited by "Apple's arbitrary content and hardware restrictions." None of that has really changed with iPad 2. Make no mistake: It's really cool. But if you found yourself among the "Why did I buy this?" or "Why do I need to pay for this?" crowd, there may be nothing about Apple's second installment to change your mind. Related Content: 80beats: Meet The Daily, the World’s First iPad-Only Newspaper