SNAPSHOT: These Robot Claws Are Made From Paper 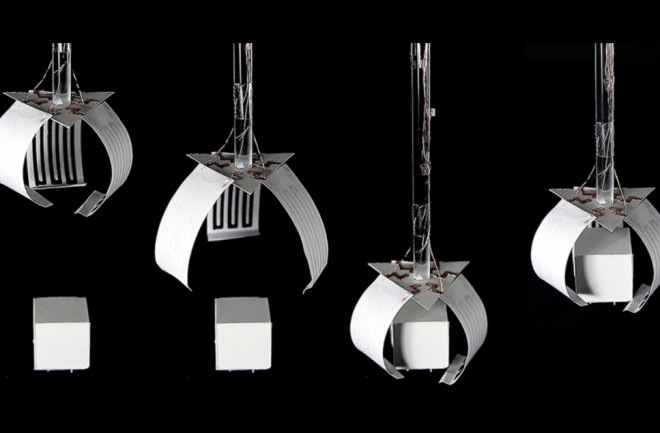 (Credit: Carnegie Mellon University) Robots made of ... paper? Researchers at Carnegie Mellon’s Human-Computer Interaction Institute have developed a pretty neat way to bring plain old paper to life. The team used an inexpensive 3D printer to apply a thin layer of conducting thermoplastic, a material that becomes pliable when warm, but regains its original, hardened shape when cool. When the researchers apply an electrical current, the melting thermoplastic makes the paper bend, fold, or flatten. Then, it springs back to its original shape when the current is removed. HCII assistant professor Lab Lining Yao developed the novel actuation technology with her team at the Morphing Matter Lab. “We are reinventing this really old material,” she said in a press release earlier this week. Researcher Guanyun Wang added “Most robots - even those that are made of paper - require an external motor. Ours do not, which creates new opportunities, not just for robotics, but for interactive art, entertainment and home applications." In addition to this claw machine, the team have already built things like a lampshade that changes shape and a paper mimosa plant that unfurls its leaves when touched.