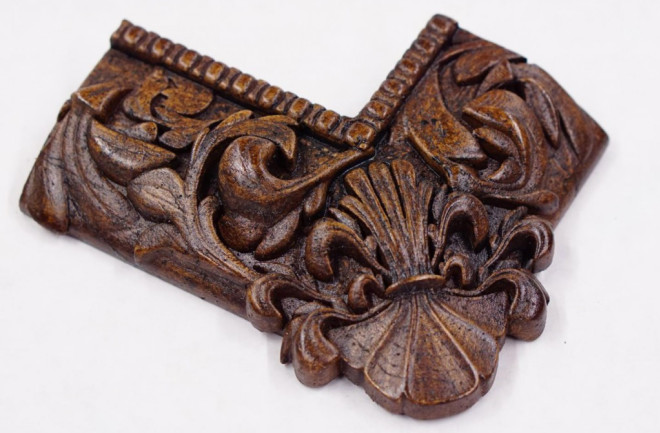 Old train parts have been made new, thanks to the magic of 3-D printing. A project led by the University of South Florida is turning to the technology to help restore The Wisconsin, the personal train car of John Ringling, one of the founders of the Ringling Bros Barnum & Bailey Circus. The 122-year old relic now resides at the Ringling Museum in Sarasota, Florida. Of course, century-old train parts are hard to come by, and the train car’s lush interior has been long been closed to the public. But that may soon change.

University of South Florida assistant professor of history Davide Tanasi and Michael Celestin, a senior research engineer, recently revealed 3-D models of the train at a conference in Vienna. In addition to full digital access, they used wood, metal and porcelain to 3-D print replacement parts that closely mimic the originals — like the 3-D printed picture frame and train hook shown here — even in age-worn appearance.

“What we tried to ensure is that we are able to take real parts out of service so that perfect weight and appearance replicas can take their place,” Celestin said in a press release. “In so doing, we are able to further preserve the fragile antique components while being able to “adjust the slider” of time’s patina on an object – stopping at as little or much age-related damage as we want. This time-machine approach to preservation allows you to very easily create a model of how a part would look if brand new today, and also allow realistic, 3-D printed replacement parts to sit alongside their time-aged counterparts.”

We’ll leave it to future archeologists to figure out which bits are original.