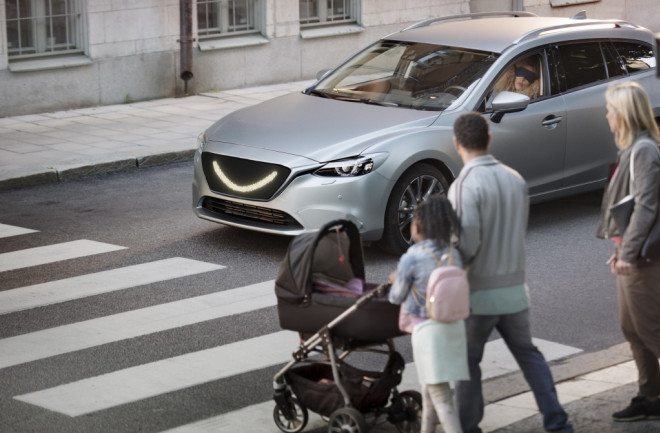 Future self-driving cars could smile to let pedestrians know it's OK to cross the street. Credit: Semcon Many people crossing the road engage in the simple pedestrian ritual of making eye contact with drivers waiting in their cars at the intersection. But a video shows baffled pedestrians pausing when they see a driver reading the newspaper or sleeping at the wheel. Such confusion could become more common as growing numbers of people cross paths with self-driving cars. The usual ritual of exchanging looks between pedestrians and drivers is likely to become endangered as self-driving cars free up human drivers to do anything but pay attention to the road. That is why Semcon, an international technology company that specializes in product development, came up with the possible solution of giving self-driving cars a front-end display that allows them to "smile" at pedestrians. The smiling car concept is just one possible way that future self-driving cars might communicate with people around them to avoid any confusion or accidents. Semcon has not outfitted any actual self-driving cars with the smile display just yet. But to show the need for pedestrians to get some sort of signal from driverless vehicles, Semcon ran a demonstration with a manually-driven car rigged up to look like a self-driving car. The "driver" in those cars pretended to busy themselves with reading or sleeping instead of paying attention to the road. Not surprisingly, pedestrians crossing the street tended to hesitate or even react with shock at the "drivers" who were sometimes literally asleep at the wheel. https://www.youtube.com/watch?v=FRNniUp7e3Q To drive the point home, Semcon also commissioned a survey by the analyst firm Inizio to research people's attitudes toward self-driving cars in countries such as Sweden, the United Kingdom, the United States and Germany. That survey showed that more than 80 percent of people in the surveyed countries will at least occasionally seek eye contact with drivers before crossing a street with no traffic light. U.S. survey participants were also most likely to say they would "always" seek eye contact with drivers (60 percent). Many of those surveyed also had little trust in self-driving cars detecting and stopping for pedestrians. U.S. survey participants had the most trust in driverless vehicles, but 38 percent still said they were "quite unconfident" or "very unconfident" about self-driving cars stopping for pedestrians. Large numbers of survey respondents across all countries seemed uncertain about the technology by responding "neither confident or unconfident." And no country had a majority of respondents saying they were "quite" or "very" confident (U.S. confidence was highest here at 33 percent).

Why Self-Driving Cars Must Communicate

Eye contact has already proven key in ordinary pedestrian encounters with normal cars driven by people. Past research has shown that eye contact between pedestrians and drivers allows for calm interactions, according to Volvo researchers based in Sweden who presented research at the AHFE 2016 International Conference on Human Factors in Transportation. But drivers who didn't seem to be paying attention made pedestrians less willing to cross the street in front of the cars. Researchers at the Design Lab of the University of California, San Diego have also begun interviewing both pedestrians and human drivers to better understand the future of communication and trust involving self-driving cars. They presented a brief paper on these issues at the 2016 ACM International Joint Conference on Pervasive and Ubiquitous Computing. https://www.youtube.com/watch?v=INqWGr4dfnU Such communication is key because it builds trust between humans and the growing numbers of robots roving the streets. And trust is crucial to public acceptance of driverless vehicles. Pedestrian encounters with self-driving cars will only rise as ridesharing companies such as Uber have begun rolling out driverless taxis for public testing. Even before the Uber public testing, the startup nuTonomy began testing a self-driving taxi service in Singapore. Such driverless taxis join the self-driving cars already being tested by Google on public roads in California, Washington, Arizona and Texas. Meanwhile, Volvo has been testing self-driving cars on public roads in Gothenburg, Sweden.

In any case, no company has yet succeeded in deploying fully automated driverless vehicles on public roads that don't require any human assistance or intervention. Even the human engineers developing and testing self-driving cars do not fully trust the technology's capabilities just yet. As a result, Uber's first public tests with customers riding in self-driving cars still include a human driver and an engineer sitting in the front seats. The humans typically take the wheel whenever the self-driving cars encountered pedestrians. Heather Somerville, a journalist with Reuters, observed her Uber driver taking control whenever pedestrians crossed the street. A Wired journalist also noted an Uber engineer's dissatisfaction during a particular pedestrian interaction. "The engineer at the wheel takes over control every few minutes," wrote Alex Davies, a transportation reporter for Wired. "Once, he’s not happy with how long the car is waiting before slowing for a pedestrian." Perhaps one day both pedestrians and self-driving cars will smile when they encounter each other at the crosswalk.