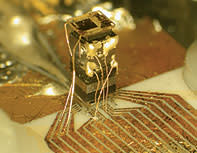 Physicists at the National Institute of Standards and Technology (NIST) in Boulder, Colorado, have created an atomic clock—the most precise kind of timepiece—so small it could fit on the tip of a pencil. The mite-size ticker keeps time in much the same way as its bulkier predecessors, by tracking the tiny vibrations of vaporized cesium atoms, but it is barely 1/100 as large. Even so, it is accurate to within one second in 300 years. NIST researchers envision that the downsized devices could eventually replace the vastly less exact quartz oscillators that are omnipresent in today’s portable electronic devices.

Unlike big atomic clocks, which require ultralow temperatures and lots of power, the new timepiece works at room temperature and runs for a full day on one AA battery. It also has the potential for mass fabrication, which could drastically reduce its cost. The trick to getting the size down, says project leader John Kitching of NIST, was combining numerous microfabrication tricks, including a novel method for trapping cesium atoms in tiny glass cells, a technique developed by his collaborators, Svenja Knappe and Li-Anne Liew, also at NIST. Kitching envisions his miniclocks ultimately finding their way into jamproof military communications, more reliable cell phones, or highly accurate automobile navigation systems. “Timing is ubiquitous,” Kitching says. “We’ll see applications emerge that we never even dreamed about.”