In a Japanese laboratory, a group of scientists is encouraging a rapidly expanding amoeba-like blob to consume Tokyo. Thankfully, the blob in question is a "slime mould" just around 20cm wide, and "Tokyo" is represented by a series of oat flakes dotted about a large plastic dish. It's all part of a study on better network design through biological principles. Despite growing of its own accord with no plan in mind, the mould has rapidly produced a web of slimy tubes that look a lot like Tokyo's actual railway network.

The point of this simulation isn't to reconstruct the monster attacks of popular culture, but to find ways of improving transport networks, by recruiting nature as a town planner. Human societies depend on good transport networks for ferrying people, resources and information from place to place, but setting up such networks isn't easy. They have to be efficient, cost-effective and resistant to interruptions or failure. The last criterion is particularly challenging as the British public transport system attests to, every time a leaf or snowflake lands on a road or railway.

Living thing also rely on transport networks, from the protein tracks that run through all of our cells to the gangways patrolled by ant colonies. Like man-made networks, these biological ones face the same balancing act of efficiency and resilience, but unlike man-made networks, they have been optimised through millions of years of evolution. Their strategies have to work - if our networks crash, the penalties are power outages or traffic jams; if theirs crash, the penalty is death.

To draw inspiration from these biological networks, Atsushi Tero from Hokkaido University worked with the slime mould Physarum polycephalum. This amoeba-like creature forages for food by sending out branches (plasmodia) from a central location. Even though it forms vast, sprawling networks, it still remains as a single cell. It's incredibly dynamic. Its various veins change thickness and shape, new ones form while old ones vanish, and the entire network can crawl a few centimetres every hour.

For a mindless organism, the slime mould's skill at creating efficient networks is extraordinary. It can find the most effective way of linking together scattered sources of food, and it can even find the shortest path through a maze. But can it do the same for Tokyo's sprawling cityscape?

Tero grew Physarum in a wet dish at a place corresponding to Tokyo, with oat flakes marking the locations of other major cities in the Greater Tokyo Area. Physarum avoids bright light, so Tero used light to simulate mountains, lakes and other prohibitive terrain on his miniature map. The mould soon filled the space with a densely packed web of plasmodia. Eventually, it thinned out its networks to focus on branches that connected the food sources. Even by eye, these final networks bore a striking similarity to the real Tokyo rail system. 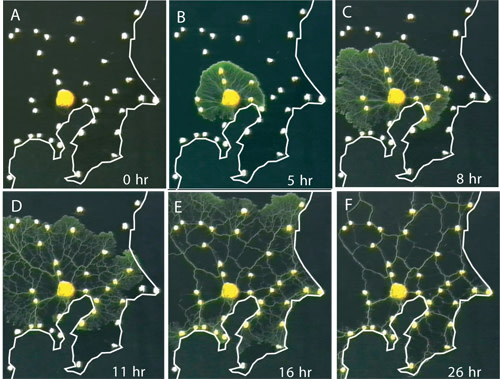 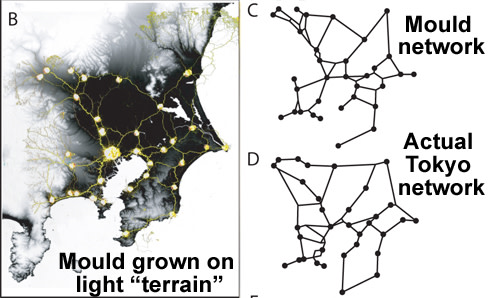 The mould's abilities are a wonder of self-optimisation. It has no sense of forward-planning, no overhead maps or intelligence to guide its moves. It creates an efficient network by laying down plasmodia indiscriminately, strengthening whatever works and cutting back on whatever doesn't. The approach seems as haphazard as a human planner putting railway tracks everywhere, and then removing the ones that aren't performing well. Nonetheless, the slime mould's methods (or lack thereof) produced a network with comparable cost, efficiency and tolerance for faults to the planned human attempt.

Tero tried to emulate this slime mould's abilities using a deceptively simple computer model, consisting of an randomly meshed lattice of tubes. Each tube has virtual protoplasm flowing through it, just as the branches of the slime mould do. The faster the flow rate, the wider the tube becomes. If the flow slows, the tubes thin and eventually disappear.

Tweaking the specific conditions of the model produced networks that were very similar to those of both live Physarum and Tokyo's actual rail system. Tweaking it further allowed Tero to boost the system's efficiency or resilience, while keeping its costs as low as possible. This, perhaps, is the engineering of the future - a virtual system inspired by a biological one that looks a lot like a man-made one.