Slaughterhouse Scraps Can Be Used to Make Mittens 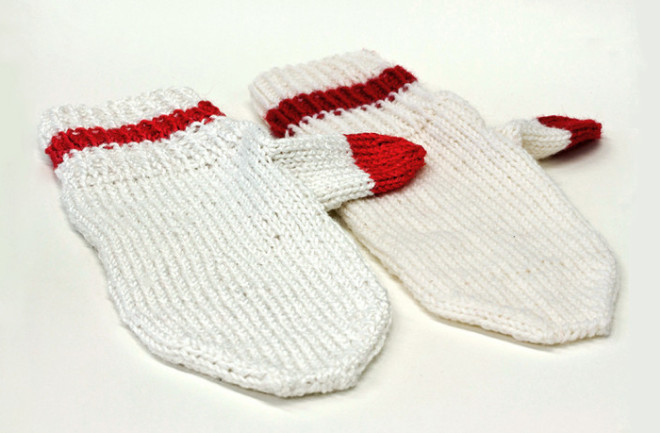 The glove on the left, made with gelatin fiber, has a silky sheen, whereas the glove made of sheep’s wool has no luster. (Credit: ETH Zurich) Swiss scientists discovered a way to warm your hands with slaughterhouse scraps, and it’s not as gross as it sounds. The butchering process yields a host of byproducts that’ll never be sold in a grocery store, but that doesn’t mean they’re useless. Cast-offs like bone, tendons and skin are rich sources of collagen, and scientists figured out a way to spin yarn from this waste, which can be used to produce clothing.

Waste Not, Want Not

Collagen is the primary component of connective tissues in our bodies. In fact, it’s the most abundant structural protein in mammalian bodies. Collagen is an ingredient of gelatin, which is in myriad food products we eat every day — it’s the stuff that gives Jell-O its bounce. Scientists also wondered, however, whether these materials could be used to create an environmentally-friendly alternative to synthetic fibers. The inspiration for this was a realization one day in the lab: When scientists added isopropyl, an organic solvent, to a heated gelatin solution, the protein precipitated and settled at the bottom of a container. The muck that amassed at the bottom of the beaker could be pulled out and stretched like taffy into a long, thin thread. Scientists devised a method to spin large quantities of their gelatin yarn, and they managed to produce more than 650 feet of their gelatin yarn per minute. They made a pair of mittens with their new fibers. Since gelatin is water-soluble, scientists treated the mittens with an epoxy resin, formaldehyde and wool grease, or lanolin, to waterproof the mittens without diminishing their flexibility. They published their yarn-making process in the journal Biomacromolecules.

Scientists are still working on improving the waterproof qualities of products made with gelatin yarn, but scientists believe they are very close to making a fiber that can serve as an alternative to synthetic fibers, and that’s a win-win for the environment. First off, making yarn from slaughterhouse scraps reduces waste from the butchering process, which introduces concentrated quantities of biological waste into the environment. Secondly, gelatin yarn offers an eco-friendly alternative to synthetic fibers, which are manufactured with polymers obtained from petroleum or natural gas. A growing segment of consumers are seeking out guilt-free products made from renewable resources, and scientists’ new yarn may someday help retailers meet this growing demand.