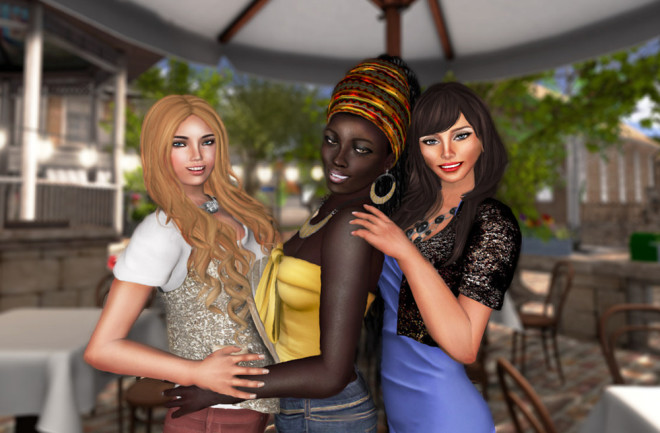 Avatars from Second Life. Image by LindenLab via Flickr Video games represent the ultimate in escapist technology for millions of people — a way to spend a few enjoyable hours slaying fantasy monsters or exploring science fiction worlds. But the dominant skin color of virtual avatars in a game can still have a very real-world impact on the experience of minority gamers, according to a recent study. The research, conducted by Jong-Eun Roselyn Lee at Ohio State University, used the online game “Second Life” to examine how diversity among virtual avatars affected the experience of both white and black players. She found that low-diversity representations of “Second Life” dominated by white avatars led black players to create virtual avatars that also appeared whiter. Such circumstances even made black players less willing to reveal their real racial identity through their avatars.

Lee gathered 56 study participants — half identifying as white and half identifying as black. She then had them read a fabricated magazine story titled “Meet the Coolest ‘Second Life’ Residents.” The eight “Second Life” avatars profiled in the story were either all white, in the low-diversity scenario, or an equal mix of white, black, Hispanic and Asian, in the high-diversity scenario. She then had them perform two tasks: Create and customize their own virtual avatars, and rate their willingness to reveal their real racial identity through the appearance of their virtual avatar. She found that black participants reported less willingness in the low-diversity scenario, and that they also created whiter avatars, as judged by objective raters. By comparison, white study participants were largely unaffected by either the high-diversity or low-diversity scenarios.

Beyond Black and White

As always, there are limits to what this study shows. First of all, the study participants never actually played “Second Life” beyond the very early stage of making a virtual avatar. A future study could improve on this by looking at diversity in the context of actual gameplay, as Lee herself mentions. The results also don’t encompass other racial or ethnic groups such as Hispanics and Asians. And Lee says that she didn’t factor in how strongly racial minority individuals identify with their particular race or ethnicity. The study’s focus on “Second Life” also necessarily limits what its results mean for other games. An online game that allows players to create customizable avatars and socialize with hundreds of other players in an open world represents a very different game experience than a single-player game that puts people in control of a very specific character within a much more focused story. In some sense, game developers have less control over racial diversity in their open-world online video games such as "Second Life," since they put the power of individual character customization in the hands of hundreds or thousands of players. But developers have greater control over how they present racial diversity within single-player games, such as Telltale's "The Walking Dead" or Ubisoft's "Assassin's Creed III: Liberation." The effects of avatar skin color may also become more complicated in video games that allow people to play non-human characters, such as elves and orcs in the popular online game “World of Warcraft.” In the case of “Second Life,” the game allows players to create non-human avatars such as robots, “furry” humanoids with animal features, and even vehicles such as aircraft.

Yet anecdotal accounts from some “Second Life” players seem to support the study's finding that the skin colors of human avatars still matters for the player’s experience. The study quoted this experience of a participant in a “Second Life” field experiment:

The study of racial diversity in video games also matters as part of a broader, ongoing discussion about the representation of women, LGBT individuals and racial minorities in both video games and the game development industry. So even limited studies of diversity in games can help move the conversation forward, step by step.