Silver Pen Lets You Draw Your Own Circuits 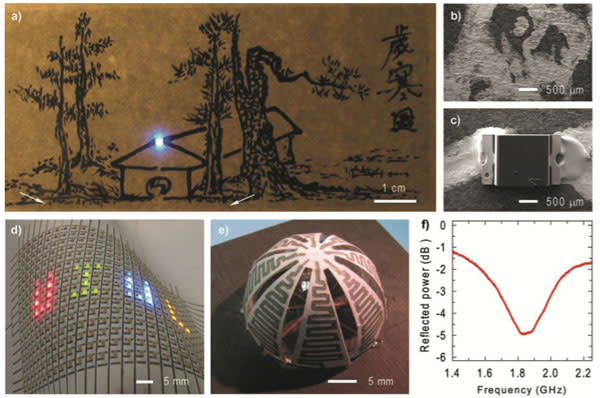 Circuits drawn with the pen make LEDs light up and give a 3D antenna its juice.

, and not much else. But if you replace that metallic ink with real silver, you get something quite remarkable: a pen that can draw functioning circuits on paper. Engineers at the University of Illinois have built such a device

and used it to put together several clever electronic doodads. Silver is a conductor

, so it ferries electrons from a power source, like a battery, to an outlet, like an LED light, even when it's just a line on a piece of paper instead of a wire. Once the silver ink dries, it's as good as wire or printed circuits at conducting electricity, and it survives all kinds of mangling---researchers had to bed the paper back and forth 6,000 times to get the ink to begin to crack and flake off, in fact---so it could be used in situations where flexibility is key. And, of course, just to make cool stuff. 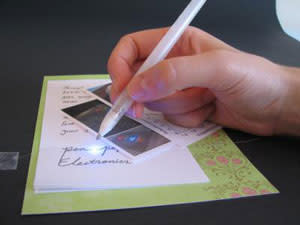 The artifact in question.

To demonstrate their pen-and-paper approach, the researchers drew a copy of a Chinese landscape painting with the pen and affixed an LED to the peak of a house's roof. Once the silver lines were connected to a battery at the edge of the page, the LED lit up. And by drawing interconnections between LEDs arranged in a grid on a sheet of paper and hooking them up to a battery, they created several glowing block letters. They even built a 3D antenna by drawing lines on a piece of sticky-backed printer paper that they folded around a glass ball. For anyone looking for a cheap way to built circuits without a printer or any custom equipment, this seems like quite the find. And if you're looking to relive the 90s, well, it's good for that too.