What if the shuttle took off more like a jet on an aircraft carrier?

Consider a typical space shuttle launch. The orbiter is so huge that only enormous engines can break it free from Earth's gravity. Big engines, in turn, demand a lot of fuel. So technicians bolt an extra tank and two booster rockets to the orbiter, point the whole contrivance straight up, and fire the engines. Whoosh! A lot of noise, a lot of flame, enough smoke and steam to suffocate a small city, and the rocket just sort of sits there for a second or two, looking as if it might fall over instead of shoot into space. Of course, this usually works out fine. But once those engines ignite, there's no stopping the bullet if something goes wrong. 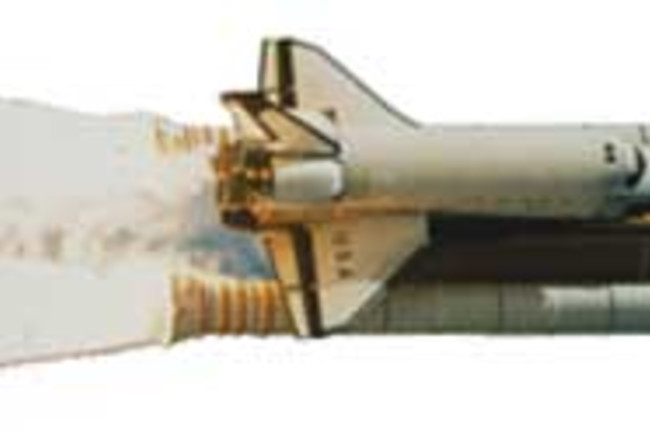 Now consider an alternative scenario. Suppose a force other than a rocket engine could accelerate the shuttle sideways along the ground until it reaches, say, 400 miles per hour before heading skyward--like a 747 gaining speed on a long runway as it develops lift. And suppose mission control could keep contact with the rocket longer, monitoring its innards as it gained speed so that it could safely be stopped, even at the last second. And instead of carrying hundreds of tons of highly flammable fuel along for the ride, suppose a lot of it could be left behind in exchange for a $75 jolt of electricity.

Scientists at NASA are beginning to think they can do just that by placing a rocket on a sledlike carrier, floating the carrier above a horizontal metal track with an electromagnetic force, shooting it down the track, and then lighting the engines at the last moment. The technology behind this frictionless sled that could accelerate a rocket to 400 mph in less than 10 seconds is called magnetic levitation, or maglev. Curiously, maglev is an idea first proposed in 1909 by Robert Goddard, the father of modern rocketry. In recent years engineers have been busy developing this concept for passenger trains.

At the Redstone Arsenal in Huntsville, Alabama, NASA engineers like Bill Jacobs and engineers from PRT Advanced Maglev Systems Inc. have built a 50-foot maglev rocket-launcher test track. When Jacobs throws a switch, alternating current hums through electromagnetic coils in a stubby aluminum rail mounted on heavy concrete piers. The current creates a repulsive magnetic field between the track and the sled, which supports a five-foot-long, 30-pound model rocket. The carrier rises with a thunk, and the magnetic field holds it poised a half inch in the air. Jacobs hits another switch and the rocket shoots ahead sharply, powered by a linear induction motor. The motor works like an electric-drill motor split open and laid out in a straight line, so that the power surges from one end to the other instead of around in a circle, thus producing thrust. On the test track, the sled races to 60 mph in less than half a second over a distance of perhaps 30 feet.

NASA scientists think a full-blown 1.5-mile version of the track--perhaps sloped upward at the end--could help cut the cost of launching payloads into orbit from $10,000 per pound to as little as $100 a pound. "By not having to carry the fuel and power with us, we can design smaller and therefore cheaper vehicles," says Sherry Buschmann, launch technologies manager at Marshall Space Flight Center.

Using an off-board energy source could mean a 20 percent reduction in the weight of the vehicle--or a 20 percent increase in payload. It would also, Buschmann says, "enable a safe abort scenario." Keeping a rocket in contact with the ground during the crucial first seconds would allow onboard sensors to detect problems and report them to a computer that might even be able to repair them before liftoff.

The idea seems nothing short of ingenious if only because the shuttle, originally designed to economically fly about 30 times per year, has never lived up to those expectations. Last year's shuttle budget was $2.9 billion. The rocket flew three times. NASA says a typical flight costs $400 million. But maglev launch technology is still experimental, and problems abound. A typical maglev-launched rocket would weigh 120,000 pounds and the carrier sled half that much. To stand up to the 2g force of accelerating from zero to 400 mph in 9.3 seconds, both would have to be very strong. And managing so much concentrated power will not be easy, Buschmann says. How would you store and distribute it? Flywheels? Capacitors? Batteries? And the question of exactly how the space vehicle will connect to its carrier--and disconnect--is still up in the air.

But maglev technology is moving ahead. Experimental maglev trains are running in Japan and Germany, and Pittsburgh is considering construction of a maglev train. Soon NASA will move its maglev test apparatus to the Kennedy Space Center and develop a 200-foot-long dual track with more powerful magnets. Can a fast track to outer space be far behind?

More on maglev technology can be found at the Marshall Space Flight Center's Web site: www.msfc.nasa.gov.