Short Film Depicts the Fascinating and Frightening Future of Drones 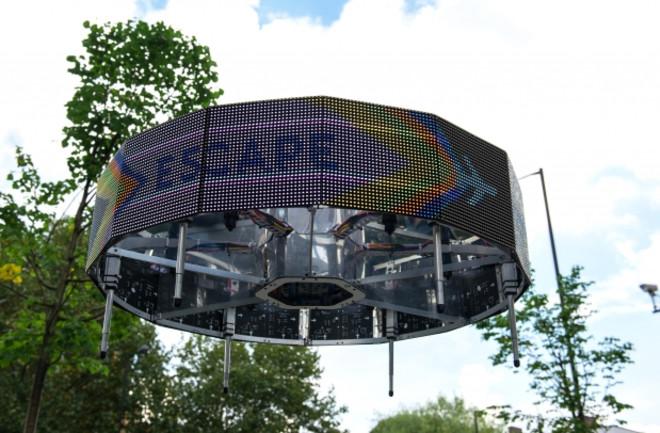 Madison, the flying billboard of the future. (The Drone Aviary) The future of humanity’s relationship with drones is both fascinating and, to be frank, creepy. That’s the picture painted by a team that put together The Drone Aviary, a research and development project from Superflux investigating what life could be like in the near future as drone technology continues to advance. The team’s vision, in this short film, will surely send shivers down some people’s spines.

A World Shared by Drones

The film is a low-altitude journey through London sometime in the future, perhaps ten or fifteen years. The stars of the film are five drones — we see the city through their eyes — that perform a variety of tasks, and incorporate converging social and technology trends into their design and function. Take, for example, the flying billboard. The not-so-unbelievable drone is a hovering display that can scan for target customers and fly to their location. Equipped with facial recognition software, the billboard drone can read faces and determine if the advertisement was well received or scoffed at.

The Nightwatchman surveillance drone would have access to massive criminal databases and could document civil offenses or even predict terrorist's activities. (Screenshot/The Drone Aviary) But some of the other drones envisioned by the Aviary project team are more menacing. The film shows surveillance drones that can tell if you’re driving legally or if you’re loitering in a prohibited area. The drones can detect potential terror threats, and tell if you’ve got a criminal record. Make an illegal U-turn? The Nightwatchman surveillance drone probably took note. But there’s also a lighter side. We see parents communicating across the oceans with family using a drone that beams back real-time footage of loved ones. The display is complete with social media updates and instant messages from friends.

The Drone Aviary team didn’t stumble upon these futurist revelations one day over coffee. They spent countless hours researching trends in current technology — and even tearing apart and rebuilding drones — to see how the flying machines will occupy spaces in our lives. The project also looks at the airspace drones will occupy, the invisible infrastructure regulating drone traffic and the regulatory framework that will guide future drone use. Of course, the project’s predictions won't all come true, but it is a pretty convincing look at our future lives with drones.