Shooting a Plane in One of The Quietest Places on Earth 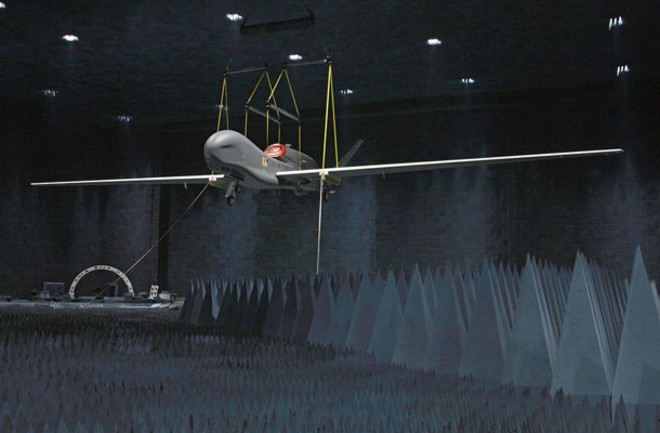 An RQ-4 Global Hawk Block 20 aircraft hangs inside the Benefield Anechoic Facility at Edwards AFB 6/30/08. RQ-4 Global Hawk is a Remotely Piloted Aircraft (RPA) used by the United States Air Force and Navy as a surveillance aircraft. "R" is the Department of Defense designation for reconnaissance; "Q" means unmanned aircraft system. The "4" refers to it being the fourth of a series of purpose-built unmanned aircraft systems (UAS). The Global Vigilance Combined Test Force concluded an electromagnetic profile study for the Global Hawk Block 20 at the Benefield Anechoic Facility in summer 2008. The three-week study marked the first time the test force used an entire Global Hawk aircraft for testing inside the anechoic facility. "We are testing the aircraft at the BAF (Benefield Anechoic Facility) because we have a sealed chamber, which allows no radio frequency to come into or go out of it," said 2nd Lt. Christopher Stilson, 772nd Test Squadron project lead engineer. "We are completely sealed off from the outside world and interferences, such as cell phones and radios, which sometimes make it hard to separate the aircraft's radio frequency from the environment." The result of this testing is part of the Federal Aviation Administration requirement for the Global Hawk's airworthiness certification. "It is a certificate required by the FAA to allow an air vehicle to fly in the national airspace," said Ed De Reyes, Northrop Grumman EMI Test Lead. "Because the Global Hawk is an unmanned aerial vehicle, the FAA is requiring a higher standard for the aircraft." Photographer Jet Fabara had this to say about making this shot: "When I first arrived at Edwards Air Force Base, the only fact I was given about the BAF was that it was used in the movie Armageddon and that if I ever had the opportunity to take photos inside the facility it would be different than any other building I'd shoot in. To give you a better idea of the building's scale, when the BAF was being constructed in 1988, the heart of the facility would be the largest electromagnetic-free environment for flight test programs like the B-52 and C-17 at that time. Since the interior of the test facility is suppose to simulate "free space," any person that enters the BAF will always tell you that testing in the BAF is like testing in a sound proof booth." "The first time I entered the BAF, I remember feeling like I underestimated the size and dimension of the entire facility. Once the facility's doors close, there is a complete sense of seclusion from the world. The blue stalagmite- and stalactite-looking material that surrounds every facet of the interior creates a cave where noise becomes completely absent. The most interesting thing about documenting inside the BAF is that I had never seen aircraft suspended from the ceiling of a building before. I'd seen aircraft in the air, inverted and banking, but never hanging. The day I was called out to document the RQ-4 in the BAF, I was also impressed at how the wings spanned across the width of the facility." Courtesy Jet Fabara/USAF