Shell Eco-Marathon: The Power of the Sun—4,400 MPG 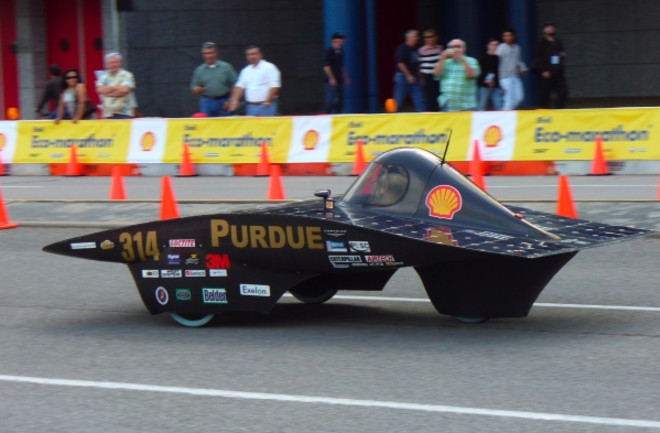 Not so long ago, the Purdue University solar car team was competing in the American Solar Challenge, an endurance race spanning more than 1,000 miles. The Shell Eco-marathon here in Houston is a totally different animal, however, requiring just 10 short track laps but asking the utmost in fuel efficiency. That sent the Purdue team back to the shop. Pulsar, the team's prototype entry here, is a scaled-down version of the long-distance Spot II. "We don't have the nice long curvature," team member Joe Trefilek tells me about the body design. While the motor and body size are both reduced, Shell adds the requirement that the solar entrants produce more energy than they consume. Pulsar's broad top covered in solar panels make it stick out like a sore thumb in the prototype category, which is mostly populated by sleek and small gas-powered cars stripped down to the bare minimum to maximize mileage. But while Pulsar is slightly less concerned with aerodynamics, it's more at the mercy of the weather. Before the race, Trefilek says, the team made computer maps of how shadows cast by the tall hotels and office buildings in downtown Houston would fall on the track to see how the driver might need to balance the energy load. He says the team wondered, "Would we have to go faster in the shade, and slower in the sun?" Thankfully, the sun shined steadily here this morning.

To compete head-to-head with the other energy sources, solar cars have to compare their energy use to the amount of energy in a gallon of gasoline and do the math. Trefilek says Purdue made two solid runs this morning, and while official word from Shell hasn't come down, he says Pulsar's on-board meter showed they'd reached the equivalent of 4,400 mpg. This afternoon the urban concept division of cars hits the track. There are far fewer of these, because the idea is that they be much closer to a street legal car. For next year, Purdue wants to make a hybrid of its solar cars and build something for the urban concept division.