Shell Eco-Marathon: How to Drive the Car of the Future 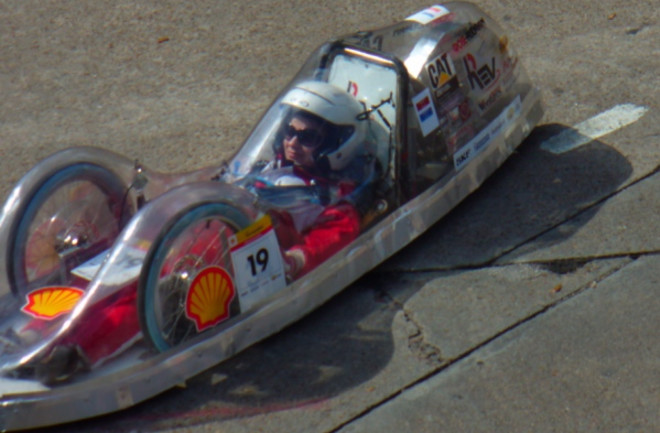 These Shell Eco-marathon cars are aiming for ultra-high mileage, so to be frank, driver comfort takes the backseat. Or, rather, it would if these cars had a backseat. Having a car come high up off the ground raises air resistance, so the prototypes are low and sleek. Blaine Castongia of Rose-Hulman Institute of Technology in Terre Haute, Indiana, whose transparent car in seen here, says suspension gets the ax, too: It's just wasted energy. As a result, Rose-Hulman drivers Bethany Brisco and Barbara Arrowsling get a rough ride. The steering controls are right by their hips, so moving right or left means swaying one's hips out of the way to make room. The two women say it's easy to see where they're going despite the low angle, unless they're sitting still. What's not easy, they say, are the race conditions. The team is accustomed to testing its cars on closed courses with smooth surfaces. This year's Shell Eco-marathon, however, forces them to drive the on Houston streets, which can be a little unpleasant even if you had suspension and were more than a few inches off the ground. The two Rose-Hulman drivers also say that racing with other cars on the track reflects more of the haphazard nature of real driving. You might have a desired route in mind to reduce mileage, but if another car cuts you off and forces you outside, too bad. Danica Patrick caused a flurry of excitement when she entered the high ranks of professional racing, but here at the eco-marathon, female drivers are the norm. Women get the glamor spot in the cockpit of many if not most of the cars, as teams seek to reduce as much weight as possible. So Brisco and Arrowsling are the ones putting Rose-Hulman's driving strategy in place. The team's two cars, running on lawn string trimmer's engines and using only 15 mL of fuel per run, are among the best in the field. One has exceeded 1,800 MPG. Castongia says he hopes to break the team's own record of 1,972 MPG, though that might be a long shot. With another 20 MPG in the afternoon run, though, Rose-Hulman could break back into second place. If they get better, the drivers probably deserve the thanks. Louisiana Tech driver Joseph Nealy says he got the team's blue car up from 173 MPG to 251 by using a better driving strategy: ditching the preconceived plan of when to accelerate, and ignoring the speedometer, which lags a few seconds behind anyway. "This time it was driven completely by ear," he says. Racing finishes in the late afternoon. We'll keep you updated when the final scores come in.