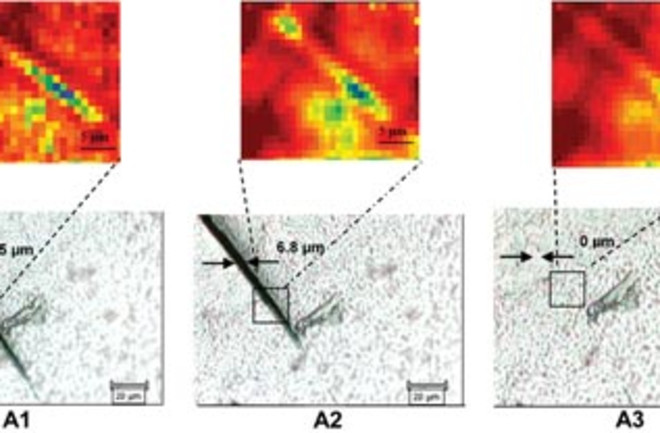 Fixing a scratch on your car could soon be as easy as parking it in a sunny driveway for an hour. Researchers have invented a self-healing coating that mends scratches when exposed to ultraviolet light, and say the material could keep everything from cars to iPods looking shiny and new. The research team

made the new coating by mixing chitosan—a derivative of chitin, the main component of arthropod exoskeletons—into polyurethane. They made tiny nicks in the new material, then exposed it to UV light about as intense as that given off by the sun. The radiation set off a series of reactions, causing damaged molecules to link up with each other again. The cuts healed in about 30 minutes [Wired].

For the new study, published in Science,

the team tested the compound's properties using a razor-blade-thin scratch. "We haven't done any of the tests to show how wide it can be," [study coauthor Marek] Urban said.... He said the polymer can only repair itself in the same spot once, and would not work after repeated scratches. "Obviously, this is one of the drawbacks," he said, adding that the chances are low of having two scratches in exactly the same spot [Reuters].

This isn't the first attempt at a self-healing coating. One previous strategy involved embedding capsules filled with a liquid healing agent into a plastic surface; when the surface got scratched the capsules broke, releasing the fluid. Another technique, more similar to the new research, used molecules that rebond when exposed to high heat. But Urban says his technology is superior because it uses cheap, readily available materials.

"There could be some issues, especially when you scale production up," said Urban. "But it shouldn't be a long time before you see this material in commercial production" [Discovery News].